Eighteen days into her new post, Minister Dawn Hastings-Williams is confident her attendance at the United Nations General Assembly meeting will better prepare her to serve in her new role. 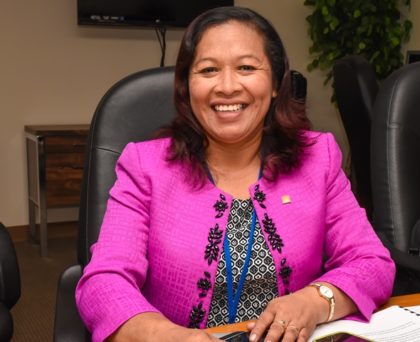 Hastings-Williams is part of the Guyana delegation at this year’s UNGA.  On Monday the minister and President David Granger engaged Malta and Costa Rica in bilateral discussions on the sidelines.

The Minister told the Department of Public Information (DPI) that the exposure at the UNGA, “is very good because I see a lot of different topics…and so I hope from these sessions I will be in a better position as to how I can better serve as a Minister.”

As Minister of Public Affairs, Minister Hastings-Williams’ role includes lending assistance to the President and Minister of State when attending conferences and coordinating engagements with the public.

The Minister previously served as the Minister within the Ministry of Communities with responsibility for water. Her reappointment as Minister of Public Affairs by President Granger is part of the government’s efforts to improve the efficiency of services it provides to Guyanese.