Georgetown, Guyana – (September 23, 2017) The Ministry of Social Cohesion in collaboration with the Dochfour/Greenfield Harmony Group, today presented bursary awards to 18 students who were successful at this year’s National Grade Six Assessment (NGSA), the Caribbean Secondary Education Certificate (CSEC) and the Caribbean Advanced Proficiency Examinations (CAPE) and for outstanding athletic performances. The simple ceremony was held at Punter’s Place, Ann’s Grove, East Coast Demerara and saw the recipients receiving gift certificates and trophies for their hard work. 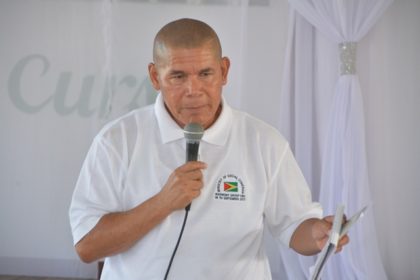 Minister of Social Cohesion with responsibility for Culture, Youth and Sport, Dr. George Norton addressing students at the bursary awards ceremony held by the Ministry of Social Cohesion in collaboration with the Dochfour/Greenfield Harmony Group at Punter’s Place Ann’s Grove, East Coast Demerara.

Minister of Social Cohesion with responsibility for Culture, Youth and Sport, Dr. George Norton, who delivered the feature address, emphasised the importance of creating a balance between educational pursuits and sport.

“I agree, yes we all want that top ten, we want to see our children’s photos in the newspapers, but sometimes we go for the over kill. Sometimes we have to round it off … for some reason we think it is books, books, books and then we question the character of the children, when we cannot understand the behaviour pattern,” Minister Norton said.

He committed to ensuring that playgrounds across the country are upgraded so that sport at the community level is fostered as he noted that this is pivotal to creating the balance between academia and extra-curricular activities, which will create well-rounded individuals. Dr. Norton commended the community for the initiative and suggested that prizes should also be given to those students who possess exceptional talents.

In the area of Social Cohesion, Minister Norton made a special call for citizens to stop seeing Guyana as a nation of six races and to embrace social cohesion. The Minister also expressed confidence that through the efforts of the Ministry, the status quo will gradually change, as the results of its various initiatives are positive thus far.

Meanwhile, District Education Officer (DEO), Demerara- Mahaica (Region Four) – Nursery, Ms. Shemlyn Batson-Andrews implored the awardees and other students in attendance to strive for success, as Guyana awaits their contributions to its development, noting that “once you persevere and you remain committed…you would be surprised to know how far you will reach.”

Oxana Johnson, Geetangali Ramballie, Vashtee Rooplall, Kelisha King and Shamar Fraser received prizes for their performances at the CSEC examinations while Anniesa Adams received a prize for her performance at CAPE and Leyanna Charles and Osrick Pellew were awarded trophies for their outstanding performances in athletics both locally and internationally.

Programme Coordinator of the Ministry of Social Cohesion, Ms. Sharon Patterson, educators, members of the private sector and members of Ann’s Grove and surrounding communities were also present at the event. 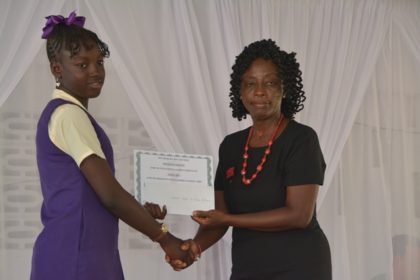 One of the awardees, Ms. Shoneza Adams, who attained 494 marks at this year’s National Grade Six Assessment receives his gift certificate. 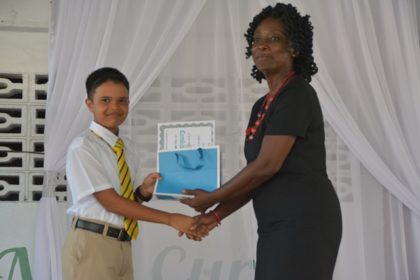 One of the awardees, Mr. Ganesh Mokutnauth, who attained 512 marks at this year’s National Grade Six Assessment receives his gift certificate. 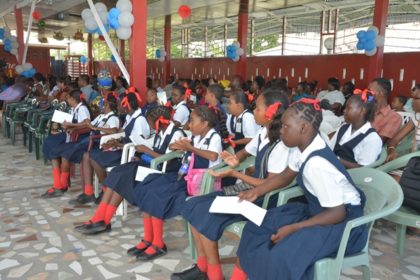 Pupils of the Clonbrook Primary School and other attendees at the bursary awards ceremony held by the Ministry of Social Cohesion in collaboration with the Dochfour/Greenfield Harmony Group at Punter’s Place Ann’s Grove, East Coast Demerara. 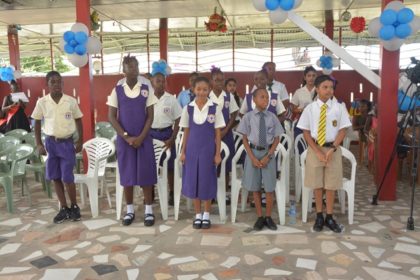 Some of the students who were awarded prizes for exceptional performances at this year’s National Grade Six Assessment, Caribbean Secondary Education Certificate and Caribbean Advanced Proficiency Examinations and athletics.