Following a recent visit to Batavia, Region Seven, Minister of Social Cohesion with the Responsibility for Culture, Youth and Sport, Dr. George Norton was informed of the need for more sporting gears in schools there. 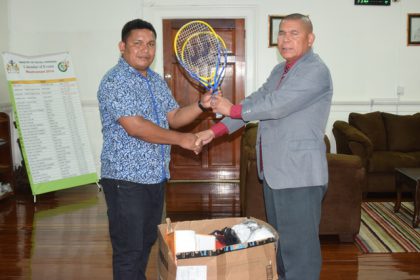 Just hours after returning to the coastland, Minister Norton made swift arrangements to have a number of sports equipment donated to the community. These include footballs, cones, cricket bats and balls, helmets, pads, tennis rackets and balls among other items.

An official handing over of the apparatuses was done at Minister Norton’s Main and Quamina Streets office, to Batavia’s Toshao, Eyon Boyal.

Boyal expressed sincere gratitude for the articles, noting that the materials will go a far way in the promotion and development of sports in Batavia, starting from the school level.

Dr. Norton has always been a firm believer that sports form an integral component of any school’s curriculum, and is monumental in the efforts of grooming great athletes of any country.

“Sports help our young ones to stay physically and mentally active, make friends, have fun, learn to play fairly as part of a team, and improve self-esteem,” the Minister said.

Minister Norton believes too that while academics are important, it is necessary for children to be well rounded.

“Sports play a role in this. It empowers children to become well rounded.”

“When we experience a little of everything that life has to offer, we become more appreciative of our differences, and are better able to unite and celebrate our diversities.”

Following the engagement with Minister Norton, Toshao Boyal gave all assurances that the donated gears will be cared for by all the students, teachers and coaches that will benefit from the use of them. 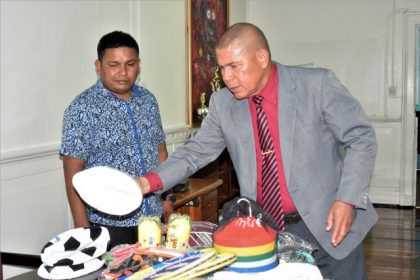 Minister of Social Cohesion with Responsibility for Culture, Youth and Sport, Dr. George Norton sorts out the items as Batavia’s Toshao, Mr. Eyon Boyal looks on.