A team from the Kingdom of Norway paid a courtesy call to Minister of Natural Resources Honourable Raphael G.C. Trotman M.P., where they discussed support for various initiatives that the Government of the Cooperative Republic of Guyana is undertaking towards a green economy and in preparation for petroleum production. 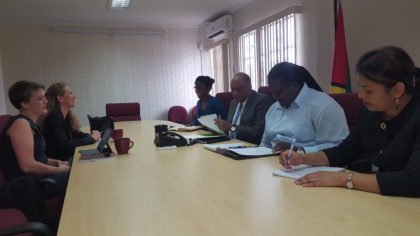 photo regarding a visit by a team from the Norwegian Ministry of Climate and Environment and NORAD to Minister of Natural Resources Hon Raphael G.C. Trotman on Wednesday, March 15, 2017

The Minister and the Norwegian party discussed prospects for support for Guyana’s renewable energy efforts towards the establishment of a Green State and support to the forest sector, particularly through NORAD’s support for the Monitoring, Reporting and Verification (MRV) process.

Minister Trotman updated the visiting team of Guyana’s plans for the extraction of oil and gas and discussed some of the arrangements being put in place at this time. He also discussed the prospects for the use of the quantity of gas discovered at the Liza well and noted that a final decision on the use of the gas is still to be made.

Minister Trotman also updated the team on Guyana’s progress towards Extractive Industries Transparency Initiative (EITI) candidacy and the intention to make a formal application by June or July 2017. He further told the visiting Norwegian team that Guyana just last week held its second G-EITI Multistakeholder Group meeting and that the sub-committees were also working and making progress.

The Minister told the Norwegian visitors that Guyana needs to strike a balance between conservation and extraction and thus looked to Norway – the Scandinavian country being an exemplar in this area.

During the meeting, the Norwegian team said that they stand ready to offer additional support for Guyana’s efforts in its continued push towards environmental stewardship, including support from Norway’s Oil for Development assistance programme.