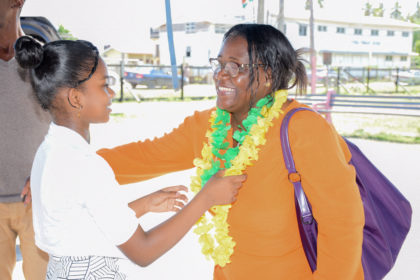 Minister within the Ministry of Natural Resources Simona Broomes being greeted by a young resident of Fyrish village.

Following the visit to the region, the Attorney General in an invited comment, explained that the visits are to help citizens understand what the government is doing and why. “We need to share with the people and discard the type of fake news and the alternative facts that they are being exposed to by the opposition members so, we are going to enlighten them and share the plans we have between now and the next elections,” Williams said.

Meanwhile, Broomes who met with residents of the Gibraltar/Fyrish Neighbourhood Democratic Council (NDC) catchment area, urged the villagers to stand up for their rights.

Other issues discussed were the conditions of the Gibraltar/Fyrish roads, insufficient road lights, the poor quality of the water in the Courtland district, lack of opportunities for youths in the villages, and land titling issues.

Minister Broomes noted that residents have to hold the elected officials of the NDC accountable. She reminded them that the resources are for the community and are not the property of a councillor or the overseers.

“It is in your hands, this government (has) brought local government back here to put power in the hands of the people,” Brooms told the residents.

Encouraged by President David Granger, in 2015, to take responsibility for the development of their community, the residents formed the 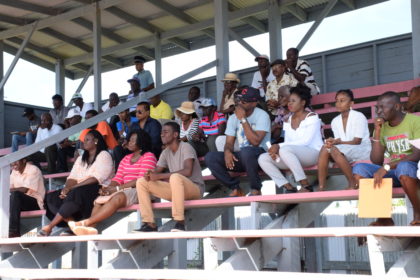 A section of the East Berbice-Corentyne villagers at the Ministerial Outreach held at the Fyrish basketball court and pavilion Sunday, March 26, 2017

Through the association, they were able to gain access to farmlands aback their village. The residents submitted a three year plan to Minister Broomes seeking assistance from the government to help fund the Association’s projects.

Another issue discussed was the playground for the Fyrish community. $1.3M was allotted to develop the playground. However, the funds could only cover the cost of fencing the facility.

The residents suggested a ‘self-help’ project to build up the ground and one resident offered to provide a truck to help with the project.

The Region Six administration was allotted approximately $6.1B in the 2017 National Budget to improve infrastructure, agriculture, health care delivery and educational facilities.