February 25, 2017
GUYANA, GINA, Saturday, February 25, 2017
A Ministerial team today, visited the Kato Secondary School in Region Eight, to get a firsthand look at the state of the building and what needs to be done. 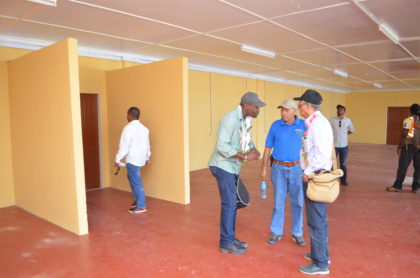 Minister of Public Infrastructure David Patterson, Minister of Education Dr. Rupert Roopnaraine and Minister of Indigenous Peoples’ Affairs Sydney Allicock having a discussion about what they were witnessing at the Kato Secondary School, Region Eight

Upon taking a tour of the school that was constructed at close to $1B, it was very evident that substandard works were done. This was visible by the cracking walls, floors which were either being eaten by termites or with large holes, poor toilet facilities and faulty electrical wiring among others.
According to Minister Patterson, the building is in a much worse state since the second audit report, conducted in October 2016. However, the Minster noted that an independent consultant from GAPE will detail the works needed to be done, in addition to what is identified in the two audit reports.
“We will be seeking from them (GAPE), their recommendations. If the consultancy has to be done by a structural engineer, then it is a must…I do think we need a mechanical engineer, and an electrical engineer. As you look around there is no electricity,  and if you look around the pipe works are all exposed,” the Minister explained.
Patterson added that, “we are trying to find a solution, because it is unfair to the community if we do not try to find a

Minister of Education Dr. Rupert Roopnaraine taking a look at the hole in the floor in one of the buildings of the Kato Secondary School complex, Region Eight

Minister Roopnaraine said that after looking at the building, there is not much that is “redemptive”. The Minister noted that, “There is a lot of work to do. There is a lot of shabby work that has been done, and I think we have to go into major repairs and reconstruction.”
GAPE’s representative, Jean Ramkellawan also voiced similar concern saying that after touring the school, it was clear that a lot of substandard work was done. Based on Ramkellawan’s assessment thus far, “Very poor supervision” is one of the main causes for the condition in which the building is currently.
The Kato Secondary School was built under the previous administration to facilitate students in the region who travel long distances to access secondary level education. However, due to the substandard work done by the contractor it has not been occupied.
The Ministerial team is hoping to have the works on the building started and completed as quickly as possible. 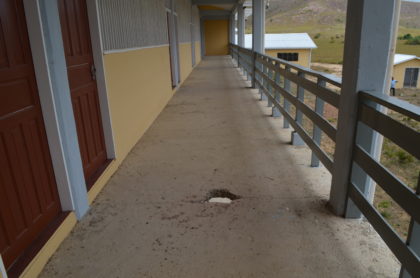 A hole in the floor at the Kato Secondary School, Region Eight 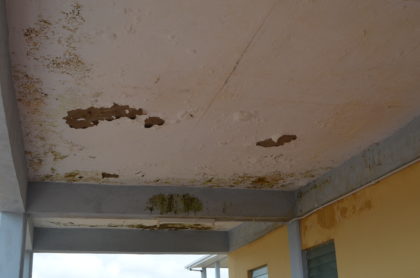 The condition of the roof at the Kato Secondary School, Region Eight 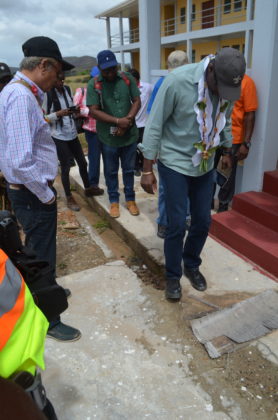 Minister of Public Infrastructure David Patterson easily breaking the ground with his boots as Minister of Education Dr. Rupert Roopnaraine looks on