In observance of Child Protection Week 2017, children from various schools on the Essequibo Coast and stakeholders joined the Ministry of Social Protection, Child Care and Protection Agency (CCPA), to rally in the fight against child sexual abuse. 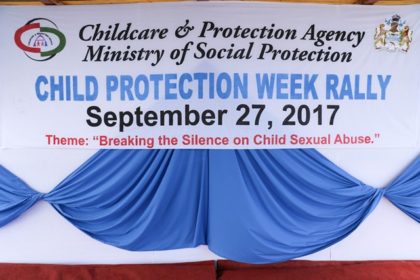 In her remarks Minister Amna Ally called on parents to make a commitment to the welfare and wellbeing of their children; in her call to action she implored the public to be more vigilant and to report suspected cases to the CCPA and law enforcement officers.  She urged parents to listen to their children and said no longer should they try to cover up the issue of child abuse. “It is imperative that we must work together to eliminate all conditions that are eroding the family such as poverty and inequality, child abuse and others… the family should be put at the center of national policy discourse since stronger and cohesive families will mean a better life for children”

As the Minster pledged continuous support from the government she said “Guyana is obligated to uphold the constitution which says that the best interest of the child shall be the primary consideration of the state… our children need special protection and attention because they are among the most vulnerable members of society”.  She further stated it is with great concern that for the first half of the year four hundred and twenty-four (424) cases of child sexual abuse have been reported to the CCPA, indicating the figure might not represent the complete extent of the problem since the crime is a hidden one which goes unreported in many instances.

The CCPA continues to assiduously work to combat these issues faced by our nation’s children. The agency, earlier this year, launched a national mulita media child abuse campaign to sensitize the population of the plight of children who suffer abuse, to propel the public into protective action while working to strengthen the capacity of parents through its special community programs.

Director of the agency, Ms. Ann Greene, said a number of persons may know of a child they suspect might be sexually abused, most often by a family member, but persons are not reporting this issue, while the child is enduring the hurt and does not want to talk because of threats against them or their family members or because they were misguided that they will bring shame to their family. She said the end result of such inaction robs children of their future.

Ms. Greene revealed the number of reports received for the year amount to five hundred and sixteen for child sexual abuse. Region two (Pomeroon – Supenaam) has the second highest rate of Child Sexual Abuse in the country. 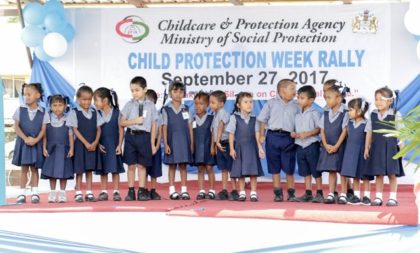