Ministry of Social Protection, Guyana, February 28, 2017 – On the 27th February 2017 Probation and Social Services officers from the Ministry of Social Protection met with residents of the East Ruimveldt Back Circle community. The event was an organized gathering in front of the home of a popular community leader. The gathering is as a result of a current community outreach project by the Ministry. The project aims to raise awareness in a combative effort against the more prevalent social ills the Ministry finds are affecting communities. 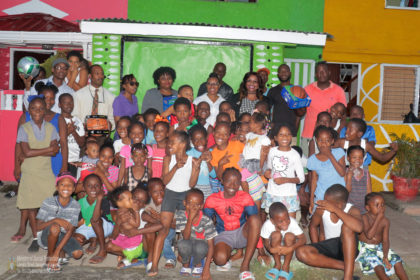 The topic for the outreach was HIV/AIDS. The audience was a very youthful one, comprising of many adolescent children. While Ms. Deborah Joseph and her team from the Probation and Social Services department of the Ministry had interpersonal and group discussions with residents, Ms. Brooks, a certified councilor and tester from National Aids Program Secretariat, spoke about HIV/AIDS.

Ms. Brooks spoke about sex among school aged children and encouraged them to walk the path of abstinence until they have left school and are ready for such activity. Reminding  the children of the recent school videos , she told them they should not let peer pressure get the best of them and that such activity was a great distraction from academics and a threat to  decency and good morality. Encouraging a very interactive session she quizzed the children on their knowledge about sexual education and STIs. She told them that they should enjoy their youth; saying sex is an adult activity. Several examples were also given about the ways in which HIV can be contracted.

In her appeal to adults she encouraged them to constantly check themselves and use protection.  She admonished that HIV testing should be 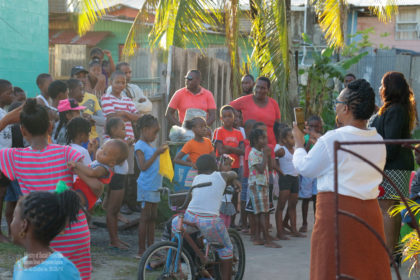 done together. She spoke about the dangers of having multiple partners and the importance of keeping those things out of the sight of their children.

The community was encouraged to use the sporting equipment so that the youth will be positively and gainfully occupied.

Mr. Davon Gordon and Mr. Nickelhi Thompson, who are community members and representatives of the East Ruimveldt Foundation, expressed sincere thanks to the Ministry for hosting such an event. They said that they are not only thankful for the sporting equipment but for the message the officers brought to the community as well.

The Ministry of Social Protection’s Community outreach project started earlier this year and is intended to take various messages to several communities. The next community on the list is the community of Mocha.