Commonwealth Games Gold Medalist, Troy Doris today visited the Ministry of the Presidency (MOTP) where he was acknowledged for his achievements with tokens presented by members of the Ministry. 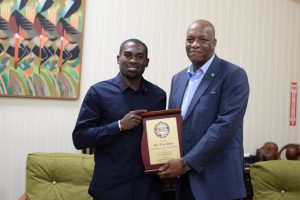 Minister of State, Joseph Harmon poses with Commonwealth Gold Medalist, Troy Doris and his plaque presented by the Ministry of the Presidency.

Minister of State, Joseph Harmon in expressing gratitude to the gold medalist said, “We are proud of your achievements and hope you strive for higher heights.”

He added, “We will do what we can at this level to make sure you can achieve that, and that those other athletes here in Guyana have the assurance that the government stands solidly behind them as they strive for higher levels of excellence.” 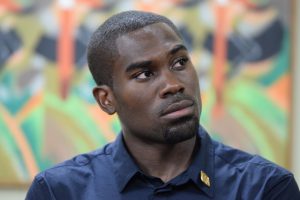 The State Minister highlighted over the past years athletes at the local level have been excelling even more. “It is part of a programme we have in government that is rewarding athletes through scholarships and preparing the conditions for them, to do better on the international stage.”

Boasting of the synthetic track at Leonora, Minister Harmon recalled during the 2017 National Schools Athletic Tournament several records were broken. He noted that the government’s move to create the infrastructure and conditions will allow the local athletes to excel.