(November 17, 2017) – Today, the Ministry of Education moved one step closer to realising one of its key objectives, to connect schools and classrooms in real-time across Guyana through the use of innovative technology.

The first ‘Smart Classroom’ was launched today at the National Centre for Education and Resource Development (NCERD). The 21st Century technology connects classrooms in any region of Guyana. This will serve to bridge the gap between coastal schools and those in the hinterland and rural communities. 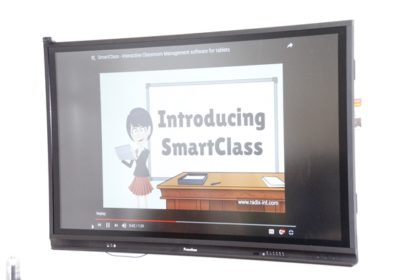 The Smart Class program being demonstrated on the Promethean Board.

Delivering remarks at the launch exercise was Chief Education Officer, Mr. Marcel Hutson who commented that the launch of the initiative marks a significant day in the history of education delivery in Guyana.

He said that it is symbolic of the education sector embracing the use of technology to deliver education; something the Ministry has been clamouring to do for the longest while.

He said that the occasion is just the beginning and efforts will be made to establish similar rooms across Guyana. According to the CEO, the benefits are tremendous as children and teachers can benefit from interactive learning “shifting away from the chalk and talk”.

“It is the beginning of a new season in our country and will only get better as we press on.”

Minister of Education, Hon. Nicolette Henry MP said that the launch of the Smart Classroom represents a high moment of the Ministry of Education as it is embracing a 21st Century Teaching Tool. 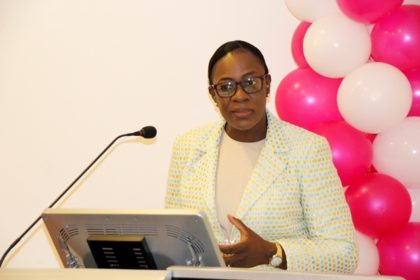 She said that the use of the Smart Classroom epitomises the Ministry’s efforts at providing quality education to all and reducing disparities between the hinterland, rural and coastal areas; an issue that will be a primary focus for the Ministry as it moves into the new year.

Meanwhile, ICT Coordinator within the Ministry of Education, Ms. Marcia Thomas said that the idea to connect classrooms around Guyana has been around for some time. However, it was after a meeting with the Minister of Education that discussed bridging the gap between the hinterland, coastal and rural areas, that ideas emerged to achieve the goal.

She said that the equipment that has been set up in a special room at NCERD were bought at a cost of US$30,000. The room features a touchscreen Promethean Board, 30 Charging stations for Tablets, Smart Phones and Computers and Ergonomic Furniture for the pupils to use.

She said that the internet connection at the NCERD building was provided by the Egovernance Unit who provided the connection at a speed of 100 Megabytes per second.

Director of NCERD, Ms. Jennifer Cumberbatch said that Guyana is truly going places. She said that the new initiative will surely make the NCERD building a resource place despite it serves to connect classrooms around the country. 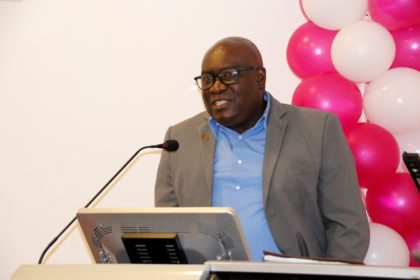 The setting up of the equipment was made possible through the committed efforts of Ms. Marcia Thomas and her team along with the assistance of overseas-based Guyanese, Mr. Sheldon Blair. Mr. Blair works at Google and gave all the technical support free of cost, a gesture that is highly appreciated.

During the launch today, schools and teachers in Regions 1, 2, 3, 4, 5, 6, 9 and 10 were connected and were able to interface with each other. Also, a number of textbooks used in the public-school system are available for use through the system which will make teaching much more efficient. One feature of the state of the art technology is that the teacher using the equipment can log the students off so that they can focus on the Promethean Board while she teaches and log them in back into the system when material on their tablets are required.

To use the system, Tablets, Smart Phones and Computers need to have access to a Zoom Cloud Meetings platform that is available on the Google Play Store.

The Smart Classroom can be used to connect schools thereby creating a universal classroom where one teacher can teach as many students as possible.