The Ministry of Foreign Affairs (MOFA) has improved the financial management of its overseas missions. 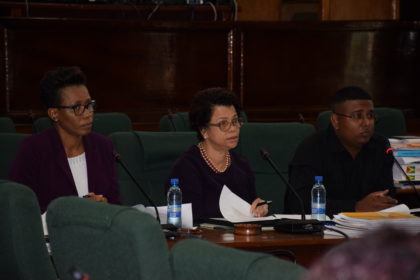 MOFA Director General (DG) Audrey Waddle appeared before the Public Accounts Committee (PAC) on Monday to answer to financial discrepancy highlighted in the 2015 Auditor General’s Report. DG Waddle noted that the MOFA has since strengthened its Economics Planning and Management Unit (EPMU) and installed home based accountants to ensure timely submission of reports. This Unit was not functioning, DG Waddle pointed out.

The 2015 Auditor General’s Report highlighted a substantial sum of unspent balances that were not paid over to the Consolidated Fund. DG Waddle told the PAC that all unspent balances were repaid to the Fund in 2016. Meanwhile, the MOFA has also improved its system for reconciling advances to missions. The Audit Report noted outstanding advances that dated back to 2009, the time of the previous administration.

DG Waddle explained that the MOFA is working closely with the respective missions to clear outstanding advances. Guyana’s most senior diplomat explained that the advances are usually approved for emergency or late notice travel to meetings from the Missions’ funds. Late submission of clearance forms were highlighted as a reason for the outstanding balances.

Currently, the MOFA has implemented a system that holds further advances until Missions submit their clearance forms.