Minister of Public Security, Khemraj Ramjattan has clarified that most of Guyana’s homicides are fueled by domestic violence.

The Caribbean and Latin America have the dubious distinction of the highest rates of interpersonal violence, internationally, Minister Ramjattan noted.

“We have the highest homicide rates in countries, in and around, this geo-political space. Countries like Honduras and El Salvador have murder rates that reach over 50 per 100,000. Jamaica is 52 per 100,000… We [Guyana] are probably one of the lowest at 15 per 100,000 and of course, that is 15 more than we want!… Every day, we have murders in some of the other Caribbean territories and very brutal ones. Here it is largely domestic type murders.” 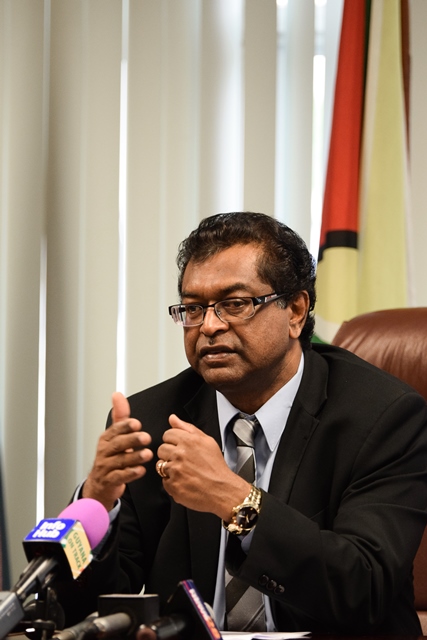 Despite this, he said, the Guyana Police Force is making “great headway in catching the criminals.” He explained that some for the recent brutal crimes, such as the murder of a Hope Plantation matriarch, were likely spawned by family disputes.

“It does appear that it may be a family member. The lady has 700 acres of estate, transported rice lands, and there must have been something about a family arrangement, whereby they would have murdered her and tried to cremate her. It was very brutal, but we have brutal members in our community.”

Lessening and preventing would depend mainly on intelligence, Minister Ramjattan opined.

“We have to get more intelligence about the nature of these communities and all of that.”

The minister noted that during his recent attendance at the CARICOM consular meeting for regional home affairs ministers in Grenada, he suggested that the tertiary institutions such as the University of the West Indies and even UG, be used to analyse the factors driving these crimes.

It is essential, he said, that stakeholders understand what is happening, especially locally.

“Crime, as we know, comes with other factors. Sometimes these young people do it for their consumption levels of alcohol or drugs. It comes from greed. It comes from a number of things we know generally. We have to have more information and more diversionary activities, and also more employment activities too, that can help in ensuring that people do not indulge in these kinds of activities.”

The Guyana Police and security apparatus are upping the ante and strategising ways to reduce crime rates from reaching the highs of other regional nations, he added. Factors such as salaries, training to boost capacity and more qualified recruits will continue to be addressed, the minister posited.

“When you start building that academic background, you are going to get a more professional police force that is faster in its ability to recognise the determinants of crime.”

The Public Security Minister made these comments during a press conference today, organised by the Alliance for Change.