Georgetown, Guyana – (November 23, 2017) President David Granger, yesterday, said that the Green State Development Strategy (GSDS) Multi-Stakeholder Expert Group will help to move the pursuit of a ‘green’ agenda from imagination to implementation and from reverie to reality. The President made these remarks at the opening of the Expert Group’s Conference this morning at the Princess Ramada Hotel. 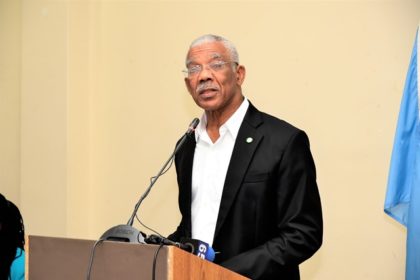 President David Granger said that the Green State Development Strategy is intended to become a rational roadmap to guide Guyana along the pathway towards the ‘green state’ and show how the ‘good life’ can be assured.

The group is expected to provide inputs based on their technical expertise and experience into the process of developing an inclusive and comprehensive strategy. Noting that Group is an essential element in the consultative and cooperative process, the Head of State said that it is expected to help to produce a ‘blueprint for a green state,’ which lead to the eventual development and adoption of a green development strategy. He noted that it is his expectation that its efforts and exertions will enable everyone to better understand why Guyana is pursuing the practices, policies and projects towards becoming a ‘green state’.

“This country… needs to develop a ‘total’, transformative plan at the household, community, regional, national and international levels. The Green State Development Strategy is not a whim or fancy. It is intended to become a rational roadmap to guide Guyana along the pathway towards the ‘green state’ and show how the ‘good life’ can be assured.  It will develop the pathway towards a diversified and resilient economy; promote the sustainable management of our economy; protect the environment and steer the country towards the creation of happy households and happy people – the ultimate measure of the ‘good life’,” he said.

The President, who has been pushing a ‘green’ agenda since his assumption to office in 2015 to combat the effects of climate change and global warming, said that the GSDS is expected to build greater economic resilience by diversifying production and reducing the country’s dependence on fossil fuels and generating renewable energy from a number of sources; biomass, hydro, solar and wind and emphasise low-carbon manufacturing.

“It will add value to production through cleaner, cheaper and renewable energy generation and propose plans to move closer towards the goal of full renewable energy by the year 2025, thereby reducing our exposure to the volatilities of oil markets.  The Green State Development Strategy will define the purpose, principles, policies and the processes, which will guide our path towards becoming a ‘green state’. A better understanding of the need for a strategy requires an appreciation of the rationale behind the ‘green state’,” he said.

President Granger reiterated that Guyana’s economy has been dependent for far too long on the six sisters; bauxite, fisheries, gold, rice, sugar and timber and while these traditional sectors have served the country well, many of them are now aged and ailing. He further noted that Guyana’s high dependence of commodity exports, coupled with its heavy reliance on the importation of fossil fuels, exposes the economy to exogenous shocks. With Guyana so rich in natural resources, the President believes that it is only fitting that they must be developed for the benefit of this and all future generations. 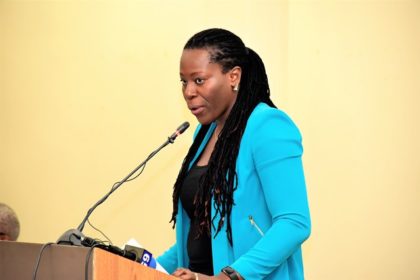 “The ‘green state’ will pursue the sustainable management of our natural resources. It will ensure that these resources will be developed in such a manner that will not result in resource exhaustion or extinction. The Department of the Environment, established in 2016, was a step in this direction. It represented our resolve to ensuring a holistic and rationalised approach to environmental conservation and management through the coordination and integration of agencies with an environmental mandate that could effectively respond to the challenge of the ‘green economy’ and realise the concept of sustainable development,” he said.

The Head of State explained that the GSDS is intended to impact on the livelihood of every citizen by allowing for the protection of the country’s biodiversity and the promotion of eco-tourism and eco-education, the promotion of energy generation from renewable sources and the introduction of low-emission, low-carbon manufacturing and the preservation of our wetlands, waterways and lakes and the extension of the protected areas system in every region.

“Guyana’s green grandeur is not a mere figment of its citizens’ imagination. Its grasslands, highlands, islands, wetlands, lakes, coastal mudflats, rainforests, rivers and waterfalls are spectacular. Its immunity to earthquakes, hurricanes, volcanoes and stormy weather are something to sing about. Guyana is part of the Guiana Shield, one of the world’s last remaining blocks of pristine rainforest. The ‘Shield’ is the source of 15 per cent of the earth’s freshwater reserves; its biodiversity provides ecosystem services such as food, freshwater and medicinal products. Guyana, itself, is a net carbon sink. More than 80 percent of our country is covered by forests, which are the habitat of some of world’s rarest and most unique flora and fauna,” the President said. 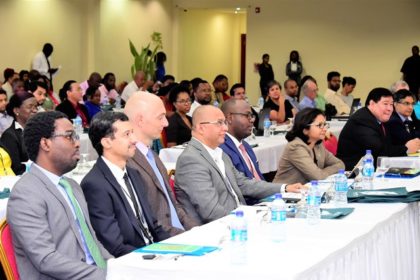 A section of the gathering at the Ramada Princess Hotel.

Meanwhile, Director of the Department of Environment, Ms. Ndibi Schwiers said that the GSDS represents the Government’s vision for inclusive growth and development of every sector of society. It represents, she said, the country’s response to a change in climate and model for the achievement of the United Nations’ 2030 Sustainable Development Goals (SDGs).

She noted that as the first meeting convenes today, it signals the beginning of fruitful discourses and actions on the achievement of the ‘green’ state as envisioned by the President.