MY TURN | INVISIBLE BUT NOT INVINCIBLE

It is slowly but surely seeping into the sinews of our soul that we are waging a war against an enemy that is invisible, but certainly not invincible. Yes, it is the war against the novel Caronavirus (COVID-19). It was beaten back in the People’s Republic of China, and almost chased out from the territory from which it originated.

But it has invisibly migrated and found a new epicenter in Italy, and is moving speedily in Western Europe, and down across to the Atlantic to North America, and into the Caribbean. At the speed with which it is spreading, if it is not contained, COVID-19 could destroy within months a big portion of the world’s population.

MOVIE FEARS
I have seen this frightening probability some years ago in Inferno, a scary Tom Hanks movie, in which the plot of an insane scientist was to detonate a biological weapon in a city with a high density in population, such as in Italy, and to let the virus travel to other crowded places.

Somehow, the movie reminded me of the unscientific fears of Thomas Malthus (1766-1834) about the economics of over-population and under-production. That fear over exponential population growth had resulted during the 1970s in sterilisation schemes of one sort or the other in several countries, including the most populous – China and India.
Styled “family planning”, another version of sterilisation was the theme of the Matt Damon movie, Downsizing, which depicted the possibility of reducing members of the human race into miniatures of ourselves.

The movies might have a point, but right now, right here, our people are living in dire fear of the coronavirus. We have gone into lock-down modes, fearful of touching even our own face, nose and eyes. We go to work if we have to, travel only when necessary, and observe advisories on good hygiene and sanitation.

PARTY POLITICS
Guyanese across the board understand that Caronavirus is not about party politics. It is not about racial sentiments. Yet I would see some folks (trolls, they are called) who foolishly feel safe behind their electronic devices or in some overseas rat-holes that they fear the virus would not infect, want to make it so. They pith the recent elections against the epidemic, and hopelessly see the latter as a political ploy. All I can say to this is that it is real, bro. The pandemic is daily killing hundreds out there, and has claimed one life in Guyana. We may be lucky so far, but we are not yet safe.

We must we grateful that our Government has been vigilant, and that President Granger has authorized several agencies to implement a Table of Measures to prevent and control the spread of the virus, and to save our people from further exposure and from infection.
The President has designated me Head of a National Task Force to coordinate and oversee the measures being taken by various front-line agencies, and to give these agencies, especially our medical, port health and sanitary workers, the support they need.
We started off as a Ministerial Task Force but we have since invited the Leader of the Opposition, and the leadership of civil society to take part in this important work to not only sensitise our people about the dangers of the virus, but to recommend actionable measures to be taken by relevant agencies.

We have done good so far, and civil society organisations are responding positively.
As I said at the initial press conference of the Task Force, this is not a partisan political or exclusively governmental task. “All of us, all of our Regions, the entire nation, are in it together…If not, all of us will loose loved ones, and all of us will be held accountable.”

SOUNDING BOARD
It may be an opportunity also to use this national emergency as a sounding board on whether our leaders are willing to work together for the common good of our people. I have seen in the past how this could work. I have seen how it worked when Guyana wanted to take ownership of the “commanding heights of the economy”; how “critical support” evolved when the PPP perceived that a national threat to Guyana’s sovereignty had existed. I had seen it work when an aged David Westmass, personal assistant to Cheddi Jagan, joined the People’s Militia, under which it was intended to make “every citizen a soldier”, to defend our country from aggression.

Today, when the enemy is COVID-19, no call is ever greater than that for national unity. COVID is not a terrorist. It has no suicide belt. It would not self destruct. We have to collectively defeat it. COVID-19 may be invisible but it is not invincible if all of us, not only have clean hands, but we join hands!

I sincerely believe that many Guyanese want this to happen. But they want to see the 2020 elections behind us. Many of us, including the President, agonise over the delay and the damage this has done to our national fabric. Our major ethnic groups, Indo-Guyanese and Afro-Guyanese, are dagger’s tip apart. Both the coronavirus pandemic and the fragile political situation, when combined, make an explosive time-bomb. It is an unprecedented situation that requires astute leadership.

RIGHT TIME
It is unfortunate that some elements and their foreign backers have been making all the noises in order to drown out the constitutional and legal processes. The Executive, however styled — “President Granger”, “APNU+AFC” – cannot dictate the outcome of these elections. The results of the elections would be determined by the Elections Commission, which is the only constitutional authority to do so. It must await the decisions of the Judiciary, an independent branch of the State.

Last week as I was heading into a meeting of the GY COVID Task Force, my son-in-law Dr. Dustaff Persaud, sent me this message:

“If it feels wrong to take action, it is the right time.

If it feels right to take action, you are too late.”
Our leaders, for various plausible reasons, may feel that it is wrong to have reproachment now. But the time is now, before the final declaration of results of the 2020 elections. They must indicate now that they are committed to a government of national unity. 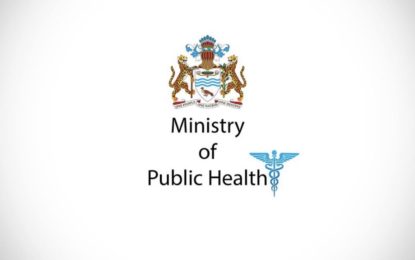 Author Details Editorial Editor email editors@dpi.gov.gy DPI, Guyana, Friday, April 3, 2020 The Minister of Public Health Hon. Volda Lawrence has issued emergency measures under the direction of HE David Granger to contain the spread of the Novel Coronavirus in Guyana. It will be in effect from... END_OF_DOCUMENT_TOKEN_TO_BE_REPLACED