TODAY, February 23, 2020, the Cooperative Republic of Guyana celebrates its Golden Jubilee as a republic. On this day 50 years ago, Guyana severed all remaining vestiges of colonial rule when a Guyanese President replaced the British Queen as Head of State.
Today, also, Guyana observes Mashramani (Mash for short), with the customary costume bands and float parade, mainly in the streets of the capital city, Georgetown. Like previous years, musical renditions adopted from the winning calypsos will accompany the street revelry, invariably intoned with the refrain, “we mashing”; “we mashing.”

ELECTIONS IN MIND
With fresh national and regional elections scheduled for March 2, eight days away, this year’s Mash appears to have these elections in mind. The theme is styled: “Guyana Together – Reflect, Celebrate, Transform.”

With a multi-racial population, Guyana still suffers from the bitter legacy of colonial politics of divide-and-rule, and from ethnic distrust and insecurity. These come to the surface at elections time, and are invariably exploited by the dominant political forces.

The six-party governing coalition (APNU+AFC) headed by President David Granger broke one-party, dominant ethnic rule, when it came to power on May 11, 2015. Styled the “Rainbow Coalition,” the APNU+AFC has energised its campaign with appeals for “togetherness” and “Guyanese-ness”, hence the Mash theme, “Guyana Together.”

The rival opposition party (PPP/C) has a sub-theme, “Stronger Together”, which seems more like an appeal for inner-party unity in the face of a paralyzing disaffection in the party’s leadership. The rebellion, though muted in more recent times, has been festering for many years. It was due mainly, over the past 10 years, to the imposition of successive unpopular and failed presidential candidates by the party’s growingly megalomaniac dictator.

MAJOR DEFEAT
With growing apathy within its ranks, the PPP/C is preparing itself for a major defeat at the March 2 polls. This will be its triple whammy having lost its parliamentary majority in 2011, then the government in 2015 after an unbroken 23 years in power.

It will adopt an unimaginative but all too predictable posture that the elections were rigged. That would be for cosmetic purpose only, in order to absolve the fractured leadership from blame, and to avoid the imminent ouster of the party dictator.

In 2015, although international observers had deemed the elections transparent and credible, the PPP/C filed a challenge in the courts alleging that those elections were rigged; it boycotted sittings of the National Assembly for several months.

For these elections, the PPP/C has threatened to lodge complaints with the international community that the elections would not be free or fair. It has started to belly-ache almost about everything, that:

* President Granger (who is Commander-in-Chief of the Armed Forces) was wearing a green shirt when he went to observe polling among the disciplined services at the army’s headquarters;

* the President was transported in an army helicopter to a political rally in the countryside;

* the Elections Commission has drastically reduced the number of private residences being used as polling places in what it described as its Indo-Guyanese strongholds, etc..

NOTHING WORKING
In the approaches to these elections, nothing seems to be working in favour of the opposition: Guyana has struck First Oil; the forecast is that from its 2% royalty plus 52% profit oil and tax revenues, Guyana will get some US$168 billion in the next 40 years; Guyana will leapfrog from 46% growth this year to become the fastest-growing economy in the world.

And, now, the disclosure yesterday by the prestigious London-based Economist Intelligence Unit that the APNU+AFC coalition is set for a win at the March 2 polls, albeit in a tight race.
Those factors are evidently working in favour of the incumbent APNU+AFC Government, and vest in it greater confidence. With every commissioning of a new project, which has proliferated all over the country and especially in hinterland areas, the coalition has been registering its claim to re-election.

PATTERNS OF PROGRESS
The PPP/C is not only sucking its soured thumbs on the sideline over this pattern of progress, but is threatening sanctions against foreign investors in the event that it should return to government.

But it cannot stop that “magic moment” of first oil which has triggered its own dialectics of attracting investors, such as those who will build a new Marriott hotel, a new Hilton hotel; and the other 100 American companies that are waiting for the green light, according to Ms Alexandra King-Pile, the Political and Economic Counsellor at the U.S. Embassy in Guyana.
I met her at the launch of production by First Bauxite/Guyana Industrial Mineral Inc. (GINMIN) in Bonasika, upper Demerara River, last Thursday, when the U.S. consortium announced that it aims to produce some 320,000 tonnes of first-class bauxite this year, having already invested over US$380 million.

At the Bonasika mines, Guyanese have started to see social benefits in job creation (with 95% of the workforce of 200 being Guyanese, including young, qualified women) and construction of a community school, housing for teachers, etc..

“MASHING” WITH PRIDE
So, today and this year we are “mashing” with a difference; mashing with pride and an inimitable Guyanese attitude that we voting like a boss; that got things under control. We are “mashing” towards elections that would return to government leadership in which there is patent confidence, and that ensures the rapid transformation of Guyana.
Yesterday we had cultural glimpses of “Guyana Together,” as our youths featured prominently and almost exclusively at the flag-raising ceremony to mark our Golden Jubilee as a republic. They re-enacted our historic transition to a republic, and depicted themselves in dance as our nation’s educators, builders and defenders. Importantly, they caricatured our nation’s longings for unity and social harmony.

Our electorate, I am sure, will give a resounding affirmation of these longings of our young people by placing our government in safe, caring and clean hands! 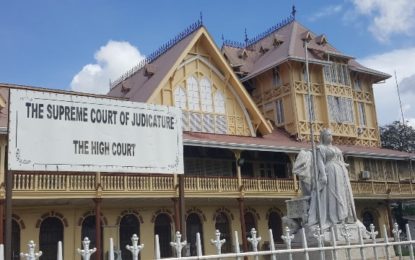