MY TURN | OIL WITH SOIL

I HAVE heard enough cynicisms from so-called resource nationalists that down-play the potential benefits Guyana could get from its oil reserves. They invariably daub as crooked the big foreign companies that could possibly help make Guyana the richest country in the world.

I followed with growing pain the nihilistic notion that we could leave our oil in the soil, and somehow still take our people out from poverty; that ExxonMobil could walk, if we up demands for a hike in royalty and profit-oil.

SAVIOUR NOT CURSE
I don’t doubt that oil has risks, many risks. But it is coming at this time as our saviour, not as our curse. Politically, oil is also powerful, and it could be used by those who have plenty of it–as a weapon.

In 1967 I was a young adventurer travelling through Europe when the Six-Day War erupted in the Middle East. Egypt and Syria suffered a humiliating defeat when Israel annexed Gaza and the Golan Heights. The Arab world reacted by imposing an oil embargo against the West.

The effects were felt in far-off, newly independent Guyana, as we experienced lines at the pump for fuel. The “Oil Weapon” was again deployed in 1973 during what has been described as the Middle East Crisis, when Arab countries banned all oil shipments to the United States, United Kingdom and Germany. Again, I was passing through Europe and I had a glimpse of the effects of that war on the Palestinian people, who were displaced and scattered as refugees.

Again, in distant Guyana, we suffered even greater consequences with our electricity services and transportation facilities almost crippled. In the potent game of oil in geo-strategic politics, the Arab world reacted with a wave of nationalisation of oil, and there was almost a universal severance of diplomatic ties with Israel.

WRATH OF OIL
Somehow, I had felt the righteous wrath of oil, and I have been reluctant to write about our budding oil industry, save for references to the estimated six billion barrels of proved reserves from some, so far, 13 off-shore wells.

Somehow I have always been shy about basking in wealth, ever since I heard a former prime minister in one of our Caribbean countries boasting (arrogantly, I would add), that “oil don’t spoil.” That may be so, but oil does run out, and could be worthless due to a glut or falling prices. Worse, if there is no balanced agro-industrial development, the oil wealth could be drained away on consumption and importation on food and other consumer essentials that could be produced here.

President David Granger has tapped into a rich deposit of realism when he cautioned, “don’t let us get drunk on oil.”

FOOD SECURITY
The Guyanese leader was at the time launching National Tree Day, as part of the observance of Agriculture Month, in my native Corentyne. He was plugging for food security and self-sufficiency. He has struck the right balance when he declared that in the first decade of oil, there will be agricultural diversification and industrialisation.

“Agriculture will not be neglected during the next decade,” President Granger assured; he expressed confidence that Guyana could export US$250 million of agricultural produce and could become the bread basket of the Eastern Caribbean.

As the newest kid on the oil block, Guyana has to temper the widespread notion of a pie in the sky for all, with the realistic expectation that the reserves do not last forever.

DEPLETION OF OIL
The eventual depletion of oil and other unanticipated hurdles that could make extraction from the reserves less viable, were probably what influenced the Guyanese President to proclaim a “Decade of Development: 2020-2029.”
In Guyana, we are blessed with both sweet oil and fertile soil. The first 10 years would be the bonanza decade. Depending on what the economists would describe as volatility in oil prices, Guyana’s stake in revenues could start from US$300 million annually, and peak at over US$5 billion by the end of the decade. Revenues from oil will facilitate unprecedented, dream-like development.

It is this decade that would be defining for Guyana, if we complement oil with the soil; fuel with food.

SOIL CULTIVATION
So, the down stream of oil production, is soil cultivation. It is common sense that with revenues from oil being pumped into agriculture, agro-processing, fishery and inland aquaculture, cattle and other large-scale livestock business, our wealth will never run dry.
What we need from our business sector is not interminable belly-aching about “local content,” but a solid focus and a strong will. We must begin to prepare for local-content opportunities in the massive downstream public investment programmes. We must develop long in advance of first oil, the necessary institutional capacity to manage big local projects alone or as joint development partners. Our business sector can enjoy the bountiful promise that lies ahead.

PROMISED LAND
The Good Book tells us about Moses wandering in the desert for 40 years before he entered the Promised Land. Not claiming the Biblical name or the fame of that Moses, in a personal way I feel privileged to live in Guyana and to share in the euphoria of our own “Promised Land.” And, if life permits, I should be around for the full 40 years of the verifiable oil boom, and long before we hit the rock-bottom of oil depletion. But, then, there is still natural gas, which begins when oil ends!

I am confident that our APNU+AFC Coalition Government holds a viable vision for the Decade of Development under our Green State Development Strategy. In simple, layperson’s language, this is: Oil plus Soil is equal to Fuel Plus Food.

I grew up in a house on the Corentyne mudflat where food security was the number one concern in a family of 12 children. My parents combined fishing with farming, so our pot was always full with cooked rice, and the karahee with greens or fish curry.
Wood was then plentiful, and the earthen fireside in the open yard was always active for what my father would cynically describe as “Chunoo’s Dharamsala.” The call-name of my mother (Gangama Nagamootoo: 1916-96) was Chunoo and she had food for everyone who came into our yard.
Today is her birthday. Happy birthday, Ma! 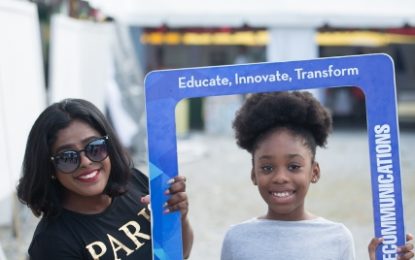 Author Details Editorial Editor email editors@dpi.gov.gy ─Youth Village gets thumbs up DPI, Guyana, Saturday, January 25, 2020 The Ministry of Public Telecommunications distributed digital tablets to lucky students at Youth Village at Durban Park on Saturday. This effort is a part of the... END_OF_DOCUMENT_TOKEN_TO_BE_REPLACED