Naamless, East Bank Essequibo to get improved level of Service

(Georgetown, Tuesday, 30th April, 2019) – Residents of Nameless on the East Bank Essequibo will see an improved level of service early in May, following moves by the Guyana Water Incorporated to reactivate the Hubu well station. 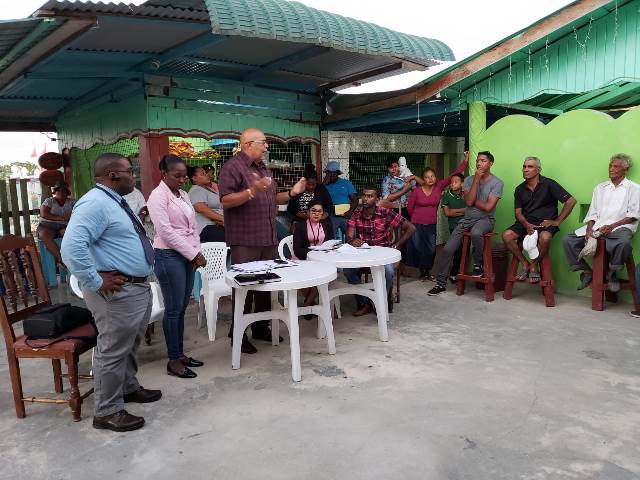 This was related to community members by GWI’s Managing Director, Dr. Richard Van West-Charles, during a community meeting on Monday, April 29.

The community is currently being served by the Vergenoegen Water Treatment Plant but residents have recently complained of receiving a reduced level of service. An assessment of the water situation in Naamless has shown that customers in neighbouring villages are pumping water directly from the distribution network, thus affecting those towards the end of the system. Customers were therefore urged to desist from this practice, since it is also illegal.

Dr. Van West-Charles highlighted that the ideal improvement measure would be to drill a new well to better serve the population. Using new technology, he stated that this can be done by August, 2019. However, since this was not budgeted for, additional revenue is needed to finance such a project.

The Managing Director used this opportunity to plead with residents to satisfy their bill payments in a timely fashion, since the community of Naamless currently has a debt figure of GYD$110M.

He called on farmers other residents settle their outstanding balances, so as to generate revenue to fund the project.

A commitment from customers to pay on time as well as to desist from pumping directly from the lines, will ensure a speedy improvement for the community.

GWI has also committed to constantly flushing the pipelines, so as to ensure a better quality of water.