The National Assembly last evening approved an additional $63.541 M for the rental of buildings for the Ministry of Public Health.  This money was approved during the consideration of Financial Paper No.1/2016, which sought to bring additional funding for government agencies from the Contingency Fund.

The money was expended on the provision of rental to the New Guyana Pharmaceutical Incorporated (GPC) for the storage of medications for the period March-June 2016, and payments to Linden Holding Company for the same purpose, along with a security deposit of $25 M.

Linden Holding Company was recently approved by Cabinet for the purpose of pharmaceuticals’ storage.  After coming under heavy questioning from the Opposition, People’s Progressive Party Civic (PPPC), Minister of Public Health, Dr. George Norton told the National Assembly that the new administration inherited two private storage facilities but is now only using one.

Dr Norton added that the Linden Holding Company had to be contacted due to an emergency and also to cut the high cost that the Ministry encounters from renting New GPC. 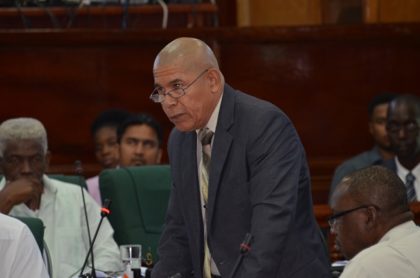 The Linden Holdings Inc. is yet to complete the storage bond.

Opposition Member of Parliament (MP), Charles Ramson, questioned the Public Health Minister on the contract document between the ministry and Linden Holdings Incorporated, and whether the contract had gone through public tendering, and whether a copy would be presented to the House.  Minister Norton responded by saying that the contract between the Ministry of Public Health and the company could only be made public after the two parties involved have come to an agreement.

Another Opposition MP, Juan Edghill, asked whether the bond was a specialised facility to store the drugs. Minister Norton responded by saying that the facility is not only suitable for the storage of pharmaceuticals, but it is in keeping with the standards set out by the Pan American Health Organisation/World Health Organisation (PAHO-WHO).

The Minister in response to another question from MP Edghill about the cost pointed out that the rental of the building was for $12M monthly.

Opposition Parliamentarian, Joe Hamilton also drilled the Minister by asking why the government wasn’t using its primary storage facility at Diamond, on the East Bank Demerara. Minister Norton responded that the “government hopes it will not have to store drugs elsewhere than Diamond for too long.”