New Digicel cell tower a ‘blessing’ for residents of Coomacka

For the residents of Coomacka, Region 10, the establishment of the new Digicel cell tower is a blessing. The tower, which was commissioned this morning in Coomacka by Minister of Public Telecommunications Catherine Hughes, Chief Executive Officer of Digicel Gregory Dean, Chairman of the community Dexter Harding and other officials, is expected to serve Coomacka and also the surrounding communities.

Minister Hughes delivering the feature address described the establishment of cell tower as an awesome occasion and step in the right direction by Digicel. The Minister noted that “Digicel did not go to all these lengths just to bring you cell phone service, you will get a whole package. Great cell phone reception and most of all, the possibility of strong reliable internet connectivity.”

Internet connectivity, Minister Hughes noted, is where the Ministry of Public Telecommunications will play its role. The Minister stated that to date, there is internet connectivity in 92 secondary schools and commissioned 56 ICT Hubs across the country.

She also revealed that very soon primary schools will also be connected to the internet. The partnership with Digicel and other such companies the Minister said, allows the government to be able to provide internet connectivity to more and more communities across the country. 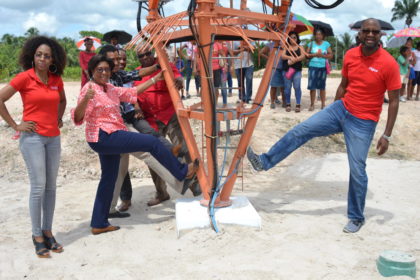 Minister of Telecommunications Catherine Hughes and CEO of Digicel Gregory Dean kicking the cell tower, as is commonly practiced when a new tower is erected 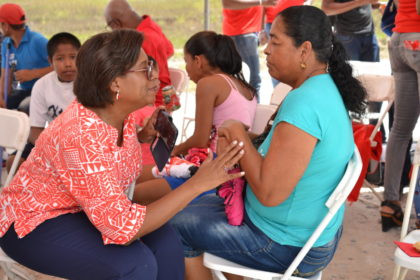 According to the residents, the request for a tower was made a year ago, since the community receives little or no cell signal. It was explained that in times of emergencies, persons had to devise ingenious ways of making phone calls.

Sybil Edmundson who has been living in the community all her life said “this is really and truly a blessing to Coomacka. For the years we have been on and off with signal, not getting signal and in case of emergency, no phone calls to get out to call the ambulance. This really is a blessing to us and we are grateful.”

Earl Vansluytman, also a resident of the community shared similar sentiments. “This is a nice thing up here, we never used to get good signal, we used to have to go all about just to get signal but this here now is a hundred per cent better.”

CEO of Digicel, Gregory Dean noted that his company is pleased to be able to provide quality service to the people of Coomacka and surrounding communities. However, he noted that while the tower is up and working perfectly, they are working to fill the gaps in the signal.

“The plan in the next few weeks is to turn on 3G here as well to many other locations where we are doing upgrades…. Fingers crossed we are hoping to have all these upgrades and improvements completed by the end November before the Christmas period” Dean stated.

The idea, he said, is to ensure that the residents of the community receive the same quality of service as anywhere else in the country.