The General Equipment Guyana Limited (Genequip) on Thursday launched a new facility at the Houston Industrial Site, East Bank Demerara. The company, which sells heavy-duty equipment, first commenced business in Guyana and the Caribbean in 1992.

Genequip’s Manager/ Director, Ranzer Vandyk explained that the company supplies a “wide range of equipment that will contribute to farming and mining.” He noted his pride in the company’s accomplishment and stressed that the new facility at the Houston Industrial Site has “upped the game” with its new and improved design. “Our old building in Mc Doom is still occupied however we decided to increase the standards on the new building, which is a plus to the Industry.

Mayor of Georgetown, Ubraj Narine who was present at the opening ceremony, told the Department of Public Information that he is very impressed with the way the private sector is flourishing. “This is to show us that this is progress; it will be a gateway to create employment for young people, the Mayor said. “

Mayor of Georgetown, Ubraj Narine and Entrepreneurs from the Private sector

Some of the tractors on display sold by Genequip

The new and improved Genequip facility at Houston Industrial Site

He added that there will be heightened collaboration with the private sector to bring improvements to the City. “A Memorandum Of Understanding was recently signed between the Private Sector Commission and the Georgetown Mayor and City Council for one year, aimed at developing the City. We need to work together to build our economy. There must be trust and it has become a priority for the Mayor and City Council.”

Mayor Narine also revealed that there was a recent Urban Task Force meeting to sensitise the public to think “out of the box,” since Georgetown will be transformed within the next five years.

“The aim is to create more investments, encourage youths to be confident and take advantage to start their own business, whether it is in the agriculture, business or mining sectors. We need the existing entrepreneurs to understand that their contribution is also vital to resuscitating and maintaining the country’s economy,” the Mayor noted. 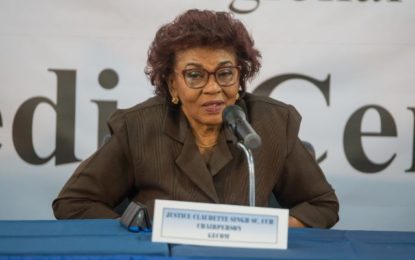