The Pan American Health Organisation World Health Organisation (PAHO/WHO) collaborated with the office of Planning and International Engagement of the University of Guyana to host a two-day consultation exercise on Non-Communicable Diseases (NCDs) in Guyana. Those engaged include representatives from the university, government agencies, Non-Governmental Organisations (NGOs) and private entities. 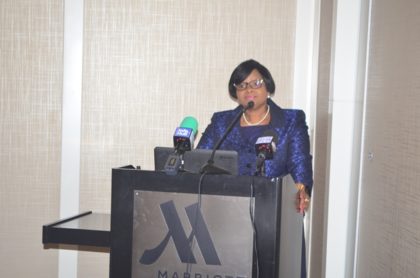 The consultation is being held from September 06 to 07 at the Marriott Hotel in Kingston, Georgetown.

The overall intention of the consultation is to create synergies in initiatives between government and NGOs in health promotion and social development. The discussion is ideal as it engages organisations with special interest in combatting NCDs, also others may have an interest in joining the fight to reduce NCDs in Guyana.

Giving a brief ‘view from the deck’, Minister of Public Health, Volda Lawrence told the consultative gathering that the youth population must be the primary target in addressing Non-Communicable Diseases. The Minister highlighted statistics which show that Guyana’s situation is reflecting a global trend of increased incidences of NCDs.

She also said that apart from the four known NCDs in the world, “we also must address mental health, and … accidents. Many times, we don’t relate them but they are related and I am talking about accidents at home and also road accidents.” Minister Lawrence said that childhood obesity, depression, misuse and abuse of drugs and suicide should also be targeted.

“Statistics regarding our children globally are disturbing because in 2002 there were 1.2 million deaths in people under the age of 20 accounting for 13 percent of all NCD (related) deaths.” The Minister added.

More than half of all adult NCDs begin very early in childhood. Minister Lawrence pointed out that the vast majority of behaviours and addiction that underlie NCDs emerge during adolescence. “Global/national trends indicate that these NCD related behaviours are on the rise, and these established behaviours persist throughout life and are difficult to change (tobacco use, harmful use of alcohol, poor eating habits, and lack of exercise).”

The Public Health Minister also revealed other statistics to be considered in approaching the scourge of NCDs and addressing them collaboratively.

“Data from the Guyana Global School Health Survey 2010 revealed that 15.6 per cent of students ages 13 through 15

Some of the participants gathered at the Marriott Hotel during Day one of consultations.

were overweight, 7.5 percent was underweight while 4.5 percent was obese. Intake of fruit and vegetables, minimal and about 70 per cent drank carbonated drinks. 2.1 percent drank alcohol regularly and 32 percent occasionally over a 30-day period.”

Another statistic indicated that 79 percent of students had their first alcoholic drink before age 14, and in most cases, parents would have had a significant role to play in the initiation of alcohol use. It was pointed out that tobacco use is also prevalent among youths

The Minister reiterated the need for intervention at all levels, to tackle the issue of NCDs, making it a multi-sectoral strategy.