No place for criminals to hide with ‘eyes on the city’

With eyes on the city, there is no place for criminals to hide and citizens can feel much safer. Over 100 intelligence surveillance cameras have been strategically placed across the city as part of the Safe City System. The safe city system is a component of the $66.8Billion ($US$32M) National Broadband Project, which was received from the Chinese Government over two years ago.

Minister of Public Security, Hon. Khemraj Ramjattan and Minister of Public Telecommunications, Hon. Catherine Hughes along with other high-ranking officials were given a preview of how the safe city system works at the New National Database Centre, Liliendaal.

Minister Ramjattan, in brief remarks, said the system is crucial. He highlighted that statistics show that 53 per cent of serious crimes occurs in the city hence the decision to launch the pilot project in Georgetown.

“This is going to be one of the best developments for our country in relation to matters of security and the capacity and capabilities built in to ensure that we can track vehicles, track suspects to the extent of knowing where they are… thorough this technology, I am just so thrilled,” the minister underscored.

Noting that the system will enhance the capacity of the police, Minister Ramjattan described it as a combination of personnel and technology that will take Guyana forward in terms of security.

The project is a collaboration the governments of Guyana and China.

The high-tech system can perform face and [car] license recognition. Several police vehicles are also equipped with cameras and radios that can be traced and accessed at any time. From the security control room, the operators have access to all the cameras across the city that they can pull up on a big screen as they keep watch.  What is more important, is that the control room is also connected with all the stations in Georgetown, making the system effective. 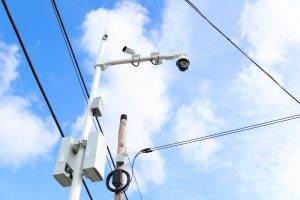 One of the intelligence surveillance cameras placed across the country 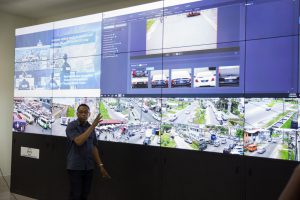 Francis Simmons, Deputy General Manager Operation, NDMA explains the technology to the officials at the preview of the Safe City System 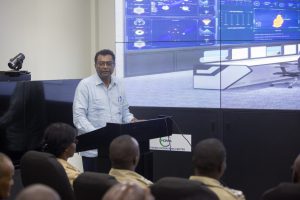 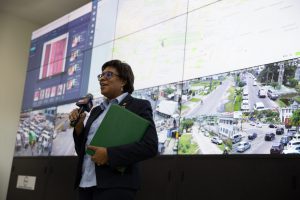 Chinese Ambassador to Guyana, HE Cui Jianchun said that security is paramount, and the new system will be very useful to Guyana’s security sector and for businesses.

“I think that in the 21st century that we cannot only count on the people, we have to count on the technology and equipment, so this is a good thing here. Now we have the technology, I think most people will be happy and just a few people are not happy,” the Chinese Ambassador said.

These are “exciting times for Guyana and its security sector,” remarked Minister Hughes. The government, she noted, is committed to using information technology to transform Guyana and ensure that more government services are accessible. The Safe City component will ensure that there are prompt and efficient public security services.

“This is a direct benefit to the people of Guyana who we know deserve the best… what we are showing you, is how through technology, we can guarantee a higher level of service to citizens of Guyana,” Minister Hughes stated.

The project in the city is a pilot which is expected to be implemented throughout the country shortly. While the Command Centre for the Guyana Police Force (GPF) will be constructed shortly, they will have full access to use the current system immediately.