The Guyana Defence Force (GDF) was commended by the Public Accounts Committee (PAC) for taking the necessary measures to address inefficiencies in its financial management.

The PAC hearing focused on the 2015 Report of the Auditor General into the GDF. Quarter Master Colonel Paul Arthur appeared before the PAC along with other GDF officials to answer queries in Parliament Chambers today.

GDF Quarter Master explained that the GDF has taken measures to ensure that cheque orders are cleared in a timely manner, officers who are without NIS and TIN are registered and unserviceable military kits among other disposable items are properly disposed of. “I’m pleased with some of the improvements that have been made. I think you are genuinely trying to improve things and I want to commend you,” Chairman of the PAC, Member of Parliament Irfaan Ali told Colonel Arthur.

Colonel Arthur also revealed that the GDF has fully updated its master inventory to include all assets following questions from PAC members. However, the GDF needs to do more to minimise breaches in its capital programmes and reduce overpayments, the PAC Chairman noted.

The Auditor General’s report has cited instances of breaches of the Fiscal Management and Accountability Act (FMAA) and instances of overpaying to contractors during the 2015 fiscal year. Colonel Arthur assured that the GDF will be strengthening its supervisory capacity to ensure that there is no reoccurrence. 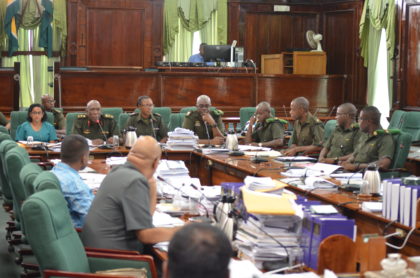