– “Guyana is on the move” – Min. Allicock tells residents

Minister of Indigenous Peoples’ Affairs, Hon. Sydney Allicock today, met and engaged the residents of Paruima and Imbaimadai located in the Upper Mazaruni, Region 7, as part of a nationwide community outreach programme.

At a meeting held in Paruima, the residents commended the government’s support towards the development of their community. According to Ismael Abrams, a community leader, the administration has been investing in Paruima over the past four years.

He especially commended the government for establishing the Community Organised for the Restoration of the Environment (CORE). This group has employed many youths in the community. Abrams, who is the team leader for the group has requested 15 additional CORE members to be employed. The group assists in the maintenance and cleaning of the environment, especially public spaces including schools and hospitals, and the yards of senior citizens.

Another resident, John Adams expressed his appreciation to the government for the modern $20M Paruima Primary school recently constructed. “Our children are more comfortable now and we are happy for that,” John said. The community’s sports ground also benefited from upgrades including solar-powered floodlights.

During his presentation, Minister Allicock told the residents that to continue this developmental process and create employment opportunities for the youths, they must create cottage industries.

Paruima Village, with a population of about 800, is said to be the only Arecuna-speaking community in Guyana. The village has fertile land for planting and is known as the breadbasket of the Upper Mazaruni. 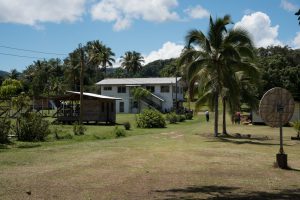 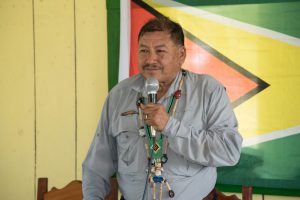 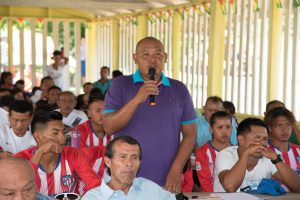 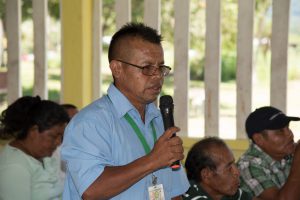 John Adams, a resident of Paruima

Residents gathered at the Paruima meeting

According to Minister Allicock, the village can use its local produce and create something unique that is in demand on the market. He cited the Pakaraima Sundried Tomato project, which is now on the international market and the Rupununi Essence, which is making headway on the local market with its natural facial cleansing product.

“Guyana is on the move,” Minister Allicock stressed.

He urged the young people to prepare themselves and get equipped with the necessary skills needed so that they can be part and parcel of the development of their community and by extension, the country.

One of the most burning issues raised was the need for transportation for the agriculture officer and equipment for the Community Policing Group (CPG). Minister Allicock promised to forward the matters to the Ministries of Agriculture and Public Security.

Over at Imbaimadai, the residents were warned against those who seek to divide them by spewing ‘fake news’. The minister said that the government is legally in place and continues work within the confines of the law.

“This is what we [government] stand for – democracy. These outreaches started a year ago, and we would have visited most of the regions already. We are doing our work; we are here to listen to you and to see firsthand some of the issues and how we can help to address them.”

Land related matters were raised Imbaimadai residents, and in this regard, Minister Allicock explained that that issue is before the courts and therefore, nothing can be done until the case is over.

The village also requested a multi-purpose building for the youths, a radio set for the Health Post and a 40-horsepower engine for the school. Minister Allicock promised to address the issue of the radio and the boat engine. He encouraged the Village Council to write a proposal for the multipurpose building so that it can be included in the 2020 budget.