Passport services to be launched next week in Linden

Georgetown, Guyana – (August 11, 2016) Upper Demerara – Berbice (Region Ten) will be the first to have fully operationalised passport application services as the government moves to decentralise such services to all  the Regions across the country. This announcement had first been made on July 15, by Minister of Citizenship, Mr. Winston Felix, at the occasion of the ‘Meet the Public’ Initiative in Linden. Today, the Minister visited Linden to participate in sensitisation activities in preparation for the Tuesday, August 16 launch on those services in Linden at the National Insurance Scheme (NIS) building. He also met with staff at the NIS when he visited the intended location. 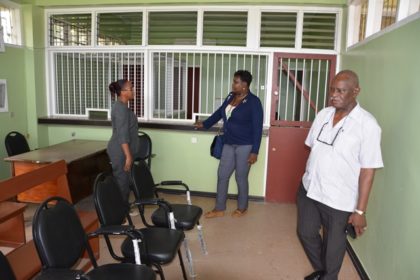 Minister of Citizenship, Mr. Winston Felix along with Assistant National Director, Community Development Councils, Ms. Sandra Adams of Linden, examine the office within the National Insurance Scheme building where the passport services will be conducted.

“This initiative has its genesis in His Excellency’s [President David Granger] concept of providing government services in the towns. It is his view that government services should be delivered in the townships created, thereby avoiding unnecessary travel to Georgetown to conduct simple business with a government agency. It is in this regard that the Department of Citizenship has taken the initiative a stage further,” Minister Felix said.

He explained that persons applying for the  renewal of passports or the replacement of lost, damaged or filled passports will be able to make their applications, weekly; on Tuesdays and Wednesdays and will be able to uplift their passports the following Thursday. Persons applying for passports for the first time, however, will still be required to visit the Immigration Office in Georgetown due to the machinery required to generate first time machine-readable passports.

The Minister said that since the current location in Linden is a temporary one, the move to have first time passport applicants acquire this service would not be possible until the Ministry can acquire permanent premises. He added that efforts are being made to acquire a permanent location.

Minister Felix said that as the roll out of these services continues across the country, the Ministry is also working with the E-Government Agency to provide other services such as the online passport applications and online visa applications. This, however, will take some time due to the need for capacity development with regard to connectivity in far outlying areas.

Following the implementation in Region Ten, the decentralising of passport application services will expanded to other areas including: Mabaruma in the -Waini Region (Region One) Anna Regina in Pomeroon-Supenaam (Region Two), New Amsterdam and the Corriverton in East Berbice-Corentyne Region (Region Six),Bartica in Cuyuni–Mazaruni (Region Seven), Mahdia in Potaro-Siparuni (Region Eight) and Lethem in Upper Takutu-Upper Essequibo (Region Nine).