The government plans to pave the road linking Kwakwani, Ituni and Linden. This is one of the projects likely to be funded from revenues to be generated by Guyana’s emerging oil and gas industry.

During a two day visit to Region Ten, Minister of Natural Resources, Raphael Trotman told residents of the two communities that they would not be left of the development that will be taking place. 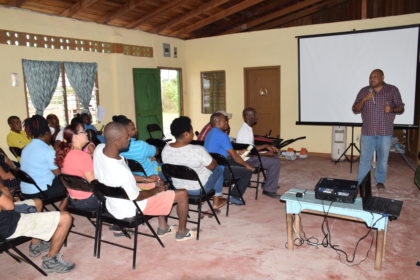 Trotman explained that some of the revenues from the oil and gas industry would go in to a Sovereign Wealth Fund and this Fund would be used to improve infrastructure across the country.

“The road from Linden, Ituni, Kwakwani that road is going to be a paved highway,” Minister Trotman told residents who applauded the plan. He explained to residents that the government is identifying projects that would have sustainable benefits and which would improve the lives of the people.

“Every Region will also receive a percentage of this (oil) money,” Minister Trotman explained indicating that could be enshrined in legislation.

The government is in the process of creating legislation and regulations that would be in place in time for oil production by 2020.

Meanwhile, Minister Trotman noted that Region 10 stands to benefit directly from the establishment of an onshore oil facility at Crab Island and the eventual decision on how to use the natural gas found along with the oil.

The two communities are located along the Berbice River. “Everything along this River, life will change for you. Your life is about to be changed over the next few years,” Minister Trotman assured the residents.

Trotman said that using the natural gas to supply the country’s energy needs is one consideration. “Which means we could replace all of GPL’s plants and equipment with natural gas engines and we are assured that there is enough gas on a daily basis to power a 200 megawatt plant,” he said.

Another consideration is using the natural gas to fuel the Crab Island facility which will be located in the Berbice River. The facility is 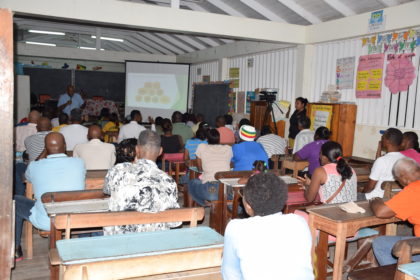 expected to see the establishment of an alumina plant and other industrial plants. “And, that is why this natural gas is directly twinned to this Region,” Trotman said.

Residents were also updated on the Local Content Policy. The government is drafting regulations for local content. “As this industry comes on stream Guyanese…should have a right to participate,” the Minister explained.

Minister Trotman did caution that not everyone will be able to have a direct job in the industry but there are other services where they would be able to find employment.

In addition, the large scale infrastructure and other projects to be undertaken across Guyana will require skilled and unskilled workforce.

Oil production is expected to begin in 2020 and the government has been working to put legislations, regulations and policies in place to govern the sector.