PM says constitutional reform a must – regarding controversy of GECOM Chairman

The United Nations(UN) and its sister organisations will be collaborating with the government of Guyana to aid in constitutional reform. This was announced by Prime Minister Moses Nagamootoo, who is currently performing the duties of the president, this afternoon at an event held in commemoration of United Nations Day. 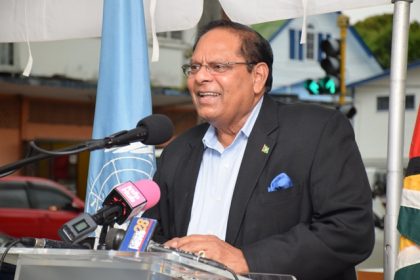 Prime Minister Moses Nagamootoo addressing the gathering at the unveiling of the United Nations (SDG) Arch.

In light of the recent controversy regarding the appointment of (retd.) Justice James Patterson as the new chairman of the Guyana Elections Commission (GECOM), the Prime Minister explained that persons “should interrogate the prescriptions by which appointments such as these would take place and the prescription is laid in our constitution,” to better understand the recommendations that determined the appointment.

This is vital, Prime Minister Nagamootoo outlined, since in the near future once the constitution is advanced, it will afford citizens “a comfort level that they can trust our laws and that our laws can be followed in a way that all will feel comfortable and secure.”  He added, “there should be no insecurity whether political or ethnic in Guyana because there is a deficiency in our supreme law in our constitution.”

Guyana’s constitution is an arrangement of fundamental principles that govern the state.  Constitutional reform seeks to modify some fundamental structures of these principles. The 1980 Constitution was reformed and the changes enshrined in the revised supreme law in 2001.

The administration’s drive for constitutional reform began in June 2017 when Prime Minister Nagamootoo read the Constitutional Reform Consultative Commission Bill 2017 on July 27 for the first time in the National Assembly.

The UN has been incrementally aiding Guyana with the constitutional reform process. In February of this year, a team of experts from the UN body visited Guyana to explore the needs for constitutional reform. The group met and discussed with the Prime Minister, Ministers and Senior Advisors, the Speaker of the National Assembly and MPs, the Leader and senior members of the Opposition, Constitutional Rights Commissions members, the GECOM Chairman, a broad spectrum of leaders and activists of various Civil Society Organisations and the private sector among others.

Guyana joined the UN in 1966 and relations have since resulted in the body having 12 branches in the country.