Minister of Public Security, Khemraj Ramjattan gave his assurances that he will maintain a hands-off approach to the daily functioning of the Guyana Police Force (GPF). 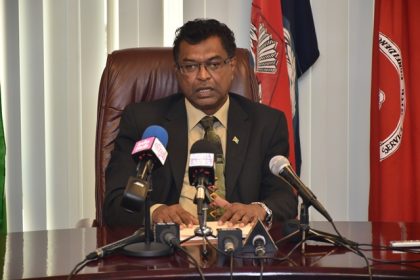 “It is not mitten or silken glove handling. It is smart leadership and administration. That is how it must be done. That is always going to pay off. When as a minister you come in and want to play policeman and do police work you are going to make a mess of it, you have to trust your police force”, the Public Security Minister said.

He explained that political interference in the past only served to undermine the authority of police officers individually and the Force as a whole, “If with poor salary, poor conditions you add interference at the political level it will crush their spirit. When you call them up and tell them to charge and not charge that one or this one their professionalism becomes impaired, it affects their judgement. They now want to know what Minister or the politicians will tell them,” he reiterated.

Acknowledging that members of the law enforcement agency are continuously faced with unfavourable working conditions Ramjattan said that with government’s continued effort to improve this issue and provide adequate tools, he is confident that the Guyana Police Force will improve its performance.

“If you check through some of the stations that we are now rehabilitating… they don’t have the laptops and all of that. Now that we are trying to give them all that, the conditions that are going to be better. They are going to perform better. When you also have them receiving so much training from the ABCE countries and the Caribbean countries it makes them far more comfortable and want to do the work,” Ramjattan said.

Government’s continued efforts to improve the country’s policing infrastructure and methods have resulted in several police stations slated for modernisation and dozens of ranks being be exposed to training, contrary to what occurred in the immediate past.