Pomeroon-Supenaam is a powerhouse – President Granger

─Reminds Coalition is committed to development and empowerment

Residents of the Pomeroon-Supenaam region were on Wednesday evening reminded of the Coalition Government’s commitment to supporting empowerment and development.

During a rally at Damon Square, Anna Regina, His Excellency, President David Granger commented on the vast potential of the region and noted that “Pomeroon-Supenaam is a powerhouse.” 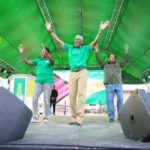 (from left) Minister within the Ministry of Communities with responsibility for Housing, Hon. Annette Ferguson, HE President David Granger and Prime Minister the Hon. Moses Nagamootoo acknowledging the cheers of the crowd. 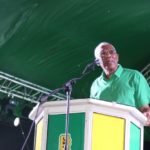 HE President David Granger addressing the audience at the rally at Damon Square, Anna Regina. 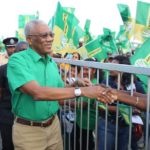 HE President David Granger greeting supporters as we arrive for the rally at Damon Square, Anna Regina.

The Head of State said the Essequibo Coast has the potential to feed the entire nation once proper leadership is in place.

“The timber, the fish, the juices, everything you could want, you can get out of this region. It is the rice bowl of Guyana, the food basket of Guyana,” he stated.

The President also remarked that while the region is known for its agricultural production, it also produces successful and hardworking people.

Highlighting that over the last four years, the government has invested heavily in ensuring citizens are empowered in all aspects,  President Granger stated that the government has committed to ensuring there are adequate health facilities across all regions, equal access to education by providing transportation and meals to children all across the country and has restored local democracy to the people of Guyana by hosting two Local Government Elections.

He vowed to the people of the region that he “will never appoint an interim management committee to replace an elected council or municipality” as was done under the previous administration.

“We are bringing solutions… we are strengthening communities. We want to ensure productivity continues to flourish in Region Two in every village and town,” the Head of State told the massive crowd.