Minister of Public Infrastructure, David Patterson has noted the concerns regarding the deplorable condition of a road in Port Kaituma (Region One). It was explained that works are currently progressing in this regard.

Speaking to the Department of Public Information (DPI), Minister Patterson explained that during the rainy season there were some defects while executing the roadworks and a team was sent to investigate the matter. 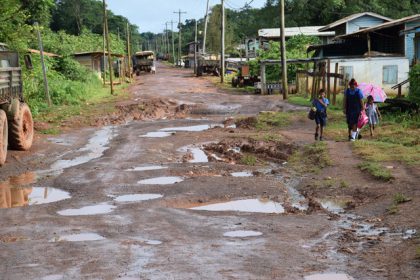 Part of the Port Kaituma airstrip road to Fitzburg Housing Scheme before the road works.

The road is said to stretch from the airstrip to the Fitzburg Housing Scheme. The issue gained the attention of the minister and his team following a concern which was raised by some residents on a social media platform.

They particularly highlighted the conditions during the rainy season and following the intervention of the minister and his team, it was discovered that the laterite material used to construct the roadway is too “clastic”; it contains too much clay. This was deemed unsuitable for the rainy season, however, the material is currently being examined. In the interim, the contractor is installing culverts and digging drains, in preparation for the works.

“We met with the contractor, received the full report and whatever rectification that is required will be done. The contractor has another six weeks in his contract so it was just the sub-base that was wet and slushy. He had to do the necessary to fix it so as soon as that is completed and the place is dried we’ll construct the rigid pavement,” Minister Patterson pointed out.

A $213.2M contract was awarded in 2017 to KP Thomas and Sons Contracting Incorporated to rehabilitate the Port Kaituma Road that stretches from the airstrip to Fitzburg Housing Scheme.

Minister Patterson said the works will be monitored to ensure that the residents in Port Kaituma have access to improved infrastructure.

The Port Kaituma/ Matthews Ridge-Baramita corridor will also be rehabilitated. These are among several key roadways in the hinterland to be upgraded, in 2018, aimed at providing easy travel and transportation access between and among hinterland communities.  A total of $1.5 billion has been allocated for these works.