Guyana has further strengthened its diplomatic ties with the accreditation of ambassadors from Portugal, Sierra Leone, and the Kingdom of Belgium on Wednesday.

His Excellency, President Granger in accepting the Letters of Credence, welcomed the envoys and assured them of his government’s support in the discharge of their duties.

“Our relations are founded on the principles of mutual respect for each other’s territorial integrity and sovereignty, mutual non-interference in each other’s internal affairs, cooperation for mutual benefit, respect for treaties and international law and the maintenance of international peace and security,” he noted. 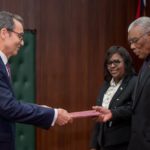 His Excellency Carlos Amaro, Ambassador-designate of the Portuguese Republic presents his letter of credence to His Excellency David Granger. 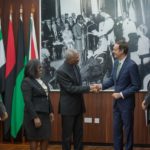 His Excellency Hugo Verbist, Ambassador-designate of the Kingdom of Belgium and His Excellency David Granger share a friendly handshake as Minister of Foreign Affairs, Hon. Dr. Karen Cummings looks on. 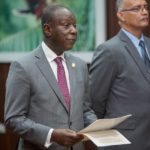 His Excellency Sidique Abou-Bakarr Wai, High Commissioner-designate of the Republic of Sierra Leone.

His Excellency Carlos Amaro, Ambassador of the Portuguese Republic, committed to working to strengthen diplomatic relations with Guyana.

“We believe in a multilateral approach, and this will certainly help to develop the relations between our two countries as well as ensuring a flow of dialogue between the authorities and institutions of both of our nations.”

President Granger noted that Guyana and Portugal have shared “rich ancestral and historical ties of over 185 years of immigration and integration in our society,” along with a mutual commitment to fighting the effects of global warming.

“It is my expectation that our shared commitment to confronting the challenges of climate change will contribute to the strengthening of our bilateral relations and it is my hope, also, that your appointment will advance increased cooperation in the fields of culture and renewable energy,” the Head of State said.

“We share similar positions on issues of global concern such as sustainable development, human rights, democratic governance, as well as maintaining international peace and security.”

President Granger said Guyana “welcomes the opportunity to explore areas of cooperation in the protection of the environment, agriculture and mining.” He also expressed optimism for cooperation on creating sustainable economies through the development of human resources, the preservation of peace, and improving the quality of life of the countries’ peoples.

Ambassador of the Kingdom of Belgium, His Excellency Hugo Verbist, commented on Guyana’s vast economic potential and expressed his eagerness to forge new relations and strengthen diplomatic ties.