PPPC councillors a no-show at the inaugural NRDCC meeting

Minister of Communities, Ronald Bulkan told the media that last evening that ‘identical letters’ were presented by the PPP/C councillors informing him that they would not participate in the two day meeting of regional councilors and heads of municipalities. 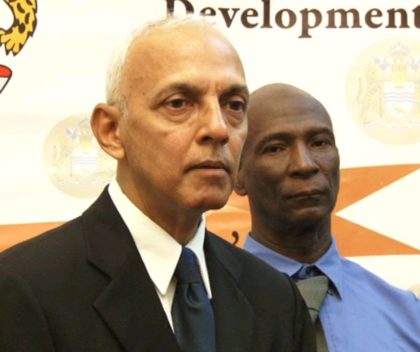 The minister said that the fact that the letters were identical suggests that there was central involvement those council’s actions, and this does not bode well for regional and local empowerment.

The minister also noted that the actions are inconsistent with the statement expressed by the Leader of the Opposition at their recently concluded party congress, where among other things he would have committed his party towards pursuing decentralization. “These actions speak to a certain degree of control and it does not help our regional leaders to bring about the strong level of leadership that they are expected to provide to bring about development in their regions,” Minister Bulkan pointed out.

Minister Bulkan said that the current  administration will not be deterred or distracted by the “unhelpful actions.” He said that the government will seek to reach out and to bring on board those elected regional and local officials who have a duty and responsibility to represent the interest of their citizens. He pointed out that , this is why the ministry would have chosen to go ahead with the day’s activity despite the absence of the majority of the official from the regions. “Our agenda will not be dictated by the opposition. We will continue to reach out to them, but as I have said, the reasons advanced by the chairpersons and the mayors, they are specious, they are baseless and I believe they are provocative,” the minister said

Minister Bulkan reminded those delegates who have spurned the invitation of the Central Government   and in particular the Ministry of Communities to participate in the day’s important event that, “they are public officers and they have a duty under the laws and under the legislation to conform to national policies.”

In the letters to the minister the regional officials expressed their concerns that the National Regional Development Consultative Committee poses a danger of impinging on the authority of Regional Democratic Councils and Municipalities. The regional and local officials also expressed fear that their participation would be seen as endorsing the initiative.

Minister Bulkan however pointed out that the initiative is a consultative committee designed  to bring together all the regions and municipalities, with a view of strengthening regional administration and strengthening the role of the Regional Democratic Councils in both the management and development of their respective regions.