Georgetown, Guyana – (June 7, 2018) President David Granger said that Guyana looks forward to continued collaboration with the Institute of Research of the Cultural Heritage of the National University of San Martin of Argentina for the restoration of artwork at the National Art Gallery. He made these remarks yesterday, during the Accreditation of Mr. Felipe Alejandro Gardella, the new Argentine Ambassador to Guyana.

He said that Guyana is deeply appreciative of, and attaches great value to, the support provided by Argentina over the years, particularly in the fields of culture, defence, health and sport.

The two countries also attach great importance to protection of the environment; both are parties to the Paris climate accord. The President said that Guyana and Argentina are cognisant of the adverse effects of climate change on small-island developing states and low-lying coastal states. In this regard, he said that Guyana “welcomes the work of the White Helmets Commission of Argentina, which is aimed at strengthening humanitarian assistance in the Caribbean, particularly in instances of natural disasters.”

The White Helmets Commission is an initiative of the Government of Argentina that is designed to act internationally. Its mission is to contribute to the reduction of hunger and poverty in line with the Millennium Development Goals and to respond with urgency to catastrophes and emergencies. “Guyana, like Argentina, is taking steps to reduce its climate vulnerability and to promote greater climate-resilient development. Guyana looks forward to intensifying cooperation with Argentina in this important field,” President Granger said.

Meanwhile, Ambassador Gradella who replaces Ambassador Luis Alberto Martino, said that the Argentine Government is very pleased to be working with Guyana on the two projects that are underway, one of the restoration of paintings at the National Art Gallery and the second has to do with improvements in the public health sector.

“This is an understanding between Argentina and the Pan-American Health Organisation, which will include Guyana. Cooperation activities are expected to start with the installation of laboratories of anti-microbial resistance surveillance,” the Ambassador said.

Prior to his accreditation, Ambassador Gardella paid brief courtesy call on Minister of State, Mr. Joseph Harmon, who is currently performing the functions of Minister of Foreign Affairs. During that meeting, which at held at the Ministry of the Presidency, Minister Harmon encouraged the new Ambassador to take advantage of what Guyana has to offer outside of the diplomatic arena. “I trust… that you would take the opportunity [to see] Guyana, all of Guyana… the hinterland, the coastal areas, our rich biodiversity… so that the beauty of Guyana can be seen all around the world,” he said.

Guyana and Argentina have enjoyed cordial relations since the establishment of diplomatic ties on October 6, 1972. 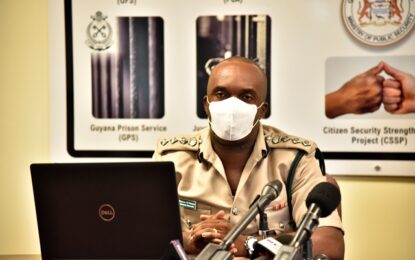 284 prisoners displaced due to fire at Lusignan

Author Details Isaiah Braithwaite Author email isaiah.braithwaite@dpi.gov.gy –All accounted for and relocated DPI, Guyana, Monday, July 13, 2020 Following the fire at Lusignan Prison on Sunday, 284 prisoners have had to be relocated. This was disclosed by the Director of Prisons Gladwin Samuels... END_OF_DOCUMENT_TOKEN_TO_BE_REPLACED

WHO concerned as pandemic worsens

Public urged to be vigilant against vandalism of...