As part of Guyana’s celebration of its Golden Jubilee Anniversary, His Excellency David Granger hosted a luncheon for several of the nation’s senior citizens.

The well-attended event was held at the Baridi Benab, State House.

Noting the significance of Guyana’s Golden Jubilee, President Granger explained that it was his wish to have the seniors involved the nation’s celebration. 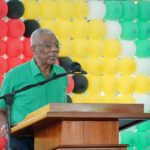 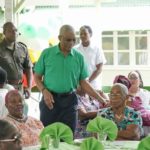 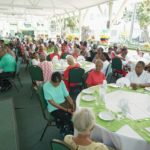 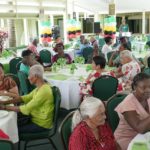 “I want you to feel part of this great national celebration when we broke our final ties with the UK and we no longer like other Caribbean regions had any allegiance to the British crown,” he told the attendees.

Reflecting on the moment Guyana gained its Republican status, the Head of State said: “coming together at this time of our Republic anniversary is important for all of us Guyanese.”

“The reason you’re here today is so that we could reminisce; those of who were alive and adults at that time, 23 February 1970 would remember the magic of being a new state, being citizens of a sovereign state.”

President Granger encouraged the seniors to share the memories of that momentous time with the young people.

“For us who were young at that time, it was a moment of tremendous pride and today I have asked you to come here to remember that pride and to share that pride with future generations.”

Guyana became Republic on February 23, 1970, and this year the nation is celebrating its 50th anniversary.