President David Granger said he will raise concerns about climate change and global warming when he attends the Commonwealth Heads of Government meeting. 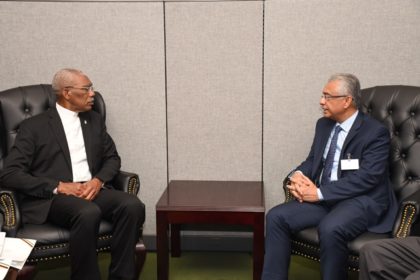 The President met with the Secretary-General of the Commonwealth, Patricia Scotland today on the sidelines of the United Nations General Assembly Meeting at the UN Headquarters, New York.

Also included in the discussion was the matter of assistance from the Commonwealth in the development of Guyana’s Oil and Gas Industry. “Mainly in that regard it is governance it is legislation drafting and using the experience in other petroleum producing countries that is the main area in which we have been collaborating”, President Granger explained.

Likewise, Guyana raised its border controversy with Venezuela during the meeting. “Mauritius, as part of the Commonwealth, has always given us support,” the President noted.