Since the Government took office in 2015, major emphasis has been placed on bridging the gap that existed between the hinterland and coastland.

The first step was to create towns in each of the four hinterland regions – 1, 7, 8 and 9 – with Mabaruma being one of the first villages to attain township status.

His Excellency, President David Granger was especially passionate about this move and mandated that each of these towns must be equipped with all the necessary services accessible to those on the coast including infrastructure, health, education and social services among others. 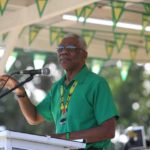 HE President David Granger addressing the crowd of supporters at the Mabaruma rally. 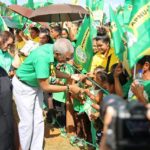 HE President David Granger stops to greet some little ones who came out to meet him. 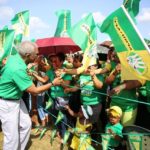 HE President David Granger greets supporters as he makes him way to the rally at Mabaruma. 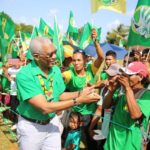 HE President David Granger greets supporters as he makes him way to the rally at Mabaruma.

At the Coalition rally held at the Mabaruma Settlement Ground today, the Head of State said that one of the happiest moments in his life was when Mabaruma became a town. It marked the beginning of the transformation of the Barima-Waini, a region that is four times the size of Trinidad and Tobago and is blessed with an abundance of natural resources.

He noted that the region which has gold, diamond and manganese and produces its own food, should be leading in development in the country; instead, the process has been stymied by the opposition-controlled Regional Democratic Council (RDC).

“The RDC is holding back the progress of Region 1. You have to change the RDC…on Monday go out in your numbers and take control of the RDC and things will be different,” the president said.

Despite this resistance, the president noted, the government was able to implement developmental projects in the region over the past four years.

The township along with Port Kaituma in the Matarkai Sub-district benefited from concrete roads for the first time, along with major developments in the other sectors.

The head of state reminded that it was just ten months after the Government took office it restored local democracy by holding Local Government Elections (LGE) with another held in 2018.

This meant that the people had the opportunity to elect their own leaders and rid the establishment of the Interim Management Committee (IMC) which was created by the former administration to control the region.

The government also provided opportunities for youths through many programmes and the provision of some 1,800 scholarships. On the issue of youth empowerment, the administration re-established the Guyana Youth Core which is training hundreds of youths from across the regions at the Kuru Kuru Training College in Region 4.

Over the next decade some 10, 000 youths will be trained at the institution President Granger noted.

The Hinterland Employment and Youth Service (HEYS) programme which replaced the PPP/C’s Community Support Officers’ programme in 2015 has trained 4000 hinterland youths and created jobs for over 3,800 youths.

Additionally, the government created the Sustainable Livelihood Entrepreneurial Development programme (SLED) which has thus far put income in the hands of 2,500 young people. Many hinterland youths took advantage of this initiative and created successful ventures through the creation of Cooperative Societies.

To reduce truancy and improve attendance in schools, the President launched a Five-Bs programme which provided boats, buses, bicycles, booths and books to students across the country. Mabaruma alone benefitted from two busses and several boats for the riverine communities. The Public Education Nutrition Service also ensured students receive a meal in school.

Further, the President has announced that from the oil revenues, students will benefit from further assistance through the Public Education Assistance Scheme.  More scholarships will also be made available to youths.

“A real leader builds opportunity for young people, fake leaders take opportunities from young people…this is not a flash-in-the-pan government, this is a government that plans for the development of the entire country.”