The Prime Minister was honoured at a special convocation during his  visit to Tamil Nadu, where he attended an Economic Conference.

Earlier, on October 4, the Madras Development Society presented to the Prime Minister its highest award, the Crown Jewel of Tamils, for his outstanding achievements in public life.

Prime Minister Nagamootoo was hailed as the first person with Tamil Ancestry who has been elevated to the post of Prime Minster and First Vice-President. In his acceptance address at Bharath University, Prime Minister urged that education should be accessible to all and that academic excellence should be put to the service of the people for their social elevation. 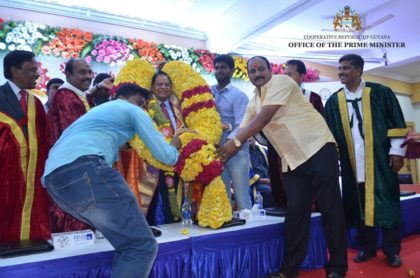 He also noted that education should not be a commodity and must not be done for profits but as a service to humanity. He explained that for education to be of any worth, those who enter public life should  serve as a duty and not for self-interest and personal rewards.

Prime Minister explained that he had refused previous offers of both university and national awards, but that he was persuaded to accept an award from an institute of higher education in Tamil Nadu as a tribute to his ancestors who left the port of Madras in 1847 for the then British Guyana. 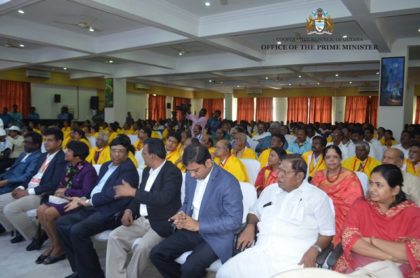 For a mile leading up to the university entrance, huge banners were draped on lamp posts and in other public places, acclaiming the Guyanese Prime Minister who was greeted at the University by a large crowd waving Guyana and India flags. Prime Minister was presented with ceremonial shawls and bouquets and  one of the biggest garlands, that measured some five feet.

Accompanying the Prime Minister was his wife Mrs. Sita Nakgamootoo, who was recognised at the university for role as an educationist.