Georgetown, Guyana – (November 12, 2017) Members of the private sector continue to support the Civil Defence Commission’s (CDC) Guyana Hurricane Relief initiative with over $22M donated over three days. On Wednesday, donors contributed $7.8M and yesterday an additional $15 million was handed over to support Guyana’s ongoing efforts to assist Caribbean countries, that are in the process of rebuilding following the devastation left in the wake of Hurricanes Irma and Maria. On Wednesday, Minister of Social Protection, Ms. Amna Ally, received the donation on behalf of Minister of State, Mr. Joseph Harmon, within whose purview the CDC falls, at a simple ceremony hosted at the CDC headquarters on Thomas Lands, Georgetown. 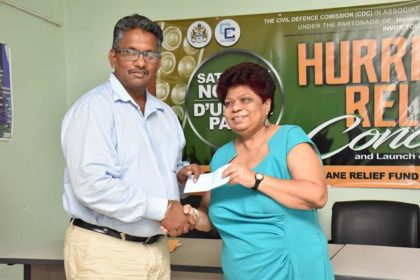 Minister Ally said that the Government of Guyana is highly appreciative of the donors’ generosity. “You don’t foresee when things are going to happen. We didn’t foresee that we would have had these Caribbean countries so ravaged as a result of the hurricanes Irma and Maria… I want to congratulate all of you, who have come forward to make a generous donation. I can assure you that it is for a good cause,” she said.

Minister within the Ministry of Social Protection with responsibility for Labour, Mr. Keith Scott, expressed similar sentiments, and noted that the Government holds close the welfare of its citizens. “You can be assured that every single time there is any need, any calamity, any disaster, we in this country stand ready to help not only Guyanese but anyone of our brothers and sisters in the Caribbean when they are in times of need,” he said.

This is the second donation made by GAICO, whose Managing Director, Mr. Komal Singh, had previously provided US$12,000 to charter a private aircraft to transport 2,900 pounds of relief items to the affected islands as part of the initial emergency relief efforts. Agriparts Machinery and Services had also previously donated $1 million to the initial national relief fund. The Guyana Water Incorporated, Saj Rice Group Incorporated, Baishanlin International Forest Development Incorporated and B.M. Soat Auto Sales each donated $500,000 and Cummings Electrical Company Limited and China Trading each contributed $300,000 and Kal-Tech Incorporated donated $200,000. On Monday, ExxonMobil Guyana and their partners Hess and Nexen donated $10 million to Guyana’s relief efforts.

In an invited comment, Managing Director of GAICO, Mr. Singh said that he decided to make another contribution to the ongoing effort as the islands are now commencing rebuilding, which will be costly.  “The last donation we made was for immediate relief and now the biggest problem is… the rebuilding efforts and the rebuilding effort will now cost quite a bit for them to get back on their feet. As part of the drive from the BK group along with the CDC on the hurricane relief concert, we thought it’s a good gesture once again to contribute to the relief effort,” he said.

The Hurricane Relief Mega Concert is being held this evening at Durban Park, Georgetown. The concert, which is being held under the patronage of the Minister of State, featuresrecording artists Patrice Roberts and Orlando Octave as well as local performers Natural Black, Jumo Primo and Dave Martins, among others.