Developing a strategic long term policy that does not solely rely on oil and one which promotes the diversification of local skills are, among the considerations for the establishment of an onshore oil supply base.

The Ministry of Natural Resources hosted a presentation today, at the Arthur Chung Convention Centre, to sensitise the private sector and other key stakeholders on the development of the oil and gas sector. The presentation titled, “Developing an onshore supply base” was made by Ernst and Young (EY) Director of Oil and Gas, Chris Pateman Jones. 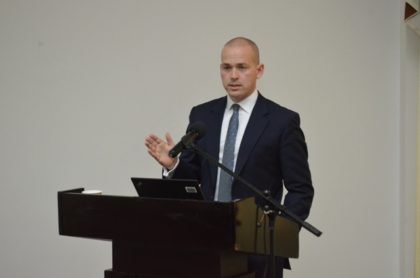 Christ Pateman Jones, Director of Oil and Gas at Ernst and Young

“Offshore projects tend to be extremely size constrained and also subject to very high…technical specification which means you have a highly skilled work force in thereand also a lot of the actual components of the project tend to be built elsewhere and then floated into position,” Jones explained.

This could reduce the country’s dependence on oil and gas but there is also the downside, limited job creation within the industry itself. Jones believes that an onshore supply base is the answer for the diversification and growth of the country’s economy.

There are several factors that should be taken into consideration in determining the need for an onshore facility. Jones said that for Guyana, an offshore project could create a “knock on effect” on the number of jobs that can be created in the country.

An onshore supply base could also lead development of local content. This base would see industries such as the maintenance service and fabrication, warehousing, crew change facilities, fuel supplies, customs licencing and tech firms along with ancillary services being utilised and skills being developed from cottage level to a high proficiency level.

However, Jones cautioned a phased approach in the development of local content. “You need to think about this over a phased approach so maybe right at the start there will be relatively small proportion of it done by nationals but there’s no reason to say if you get the contract set up appropriately you can’t transition into that,” Jones said. 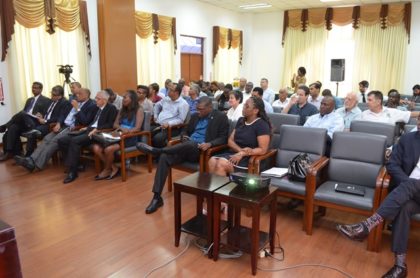 Stakeholders at the presentation.

others within the region will be a big factor against Guyana. “When we’re thinking about this we need to be thinking about it in terms of the wider economic benefit of one of these bases and importantly how you can transition this base that it doesn’t only serve the likes of Exxon…but also serves the other projects that you’re likely to build in terms of your national infrastructure plan,” Jones noted.

Jones cited Norway as a country with best practice for national development. Norway serves as the ‘poster child’ for the positive development of its oil and gas sector which is government controlled in an inclusive way. “When they initially opened the Norwegian continental shelf they didn’t have local capability and expertise so they opened it up in a phased approach,” Jones explained.

Guyana’s situation may bear similarity to Norway’s but there still remain vast differences. Jones noted that Guyana does not have time on its side. “I think we need to be acutely aware of the fact that we need to get a lot of these decisions right the first time that even some of the poster child countries…have made a lot of mistakes,” Jones pointed out.

Meanwhile, Minister of Natural Resources noted that the discourse from the presentation is all part of bringing the country “up to speed” in determining what the best course of action is as Guyana prepares for oil production.

Guyana’s immediate extraction of its oil is likely to be done offshore. The reserves are located some 200km offshore and production is targeted to begin around 2020.