In an exclusive interview with the Department of Public Information (DPI), following protest action by cane harvesters in front of the Ministry of the Presidency and the High Court, the Acting CEO said the corporation has honoured all of its obligations regarding the payment of severance at the Wales Estate. 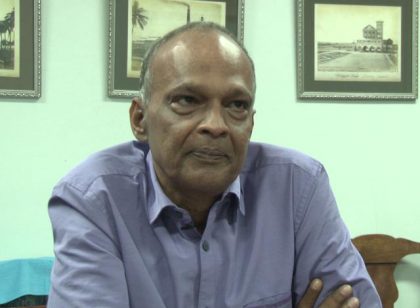 “Let’s get this right. The workers who are demanding severance are the cane harvesters – its about 374 of them – that were offered work at Uitvlugt. This is because we have a huge requirement for cane harvesters at Uitvlugt. However, they refused to go. We can’t pay severance if you are offered alternative work and that’s always been our contention,” Bhim explained.

He added, the Union’s claims of insufficient work at the Uitvlugt estate is unfounded since labour turn-out at that estate is below full capacity, while there continues to be a need for cane harvesters.

“Our contention is that we require the workers at Uitvlugt. Uitvlugt has got a huge shortage of cane harvesters. We are still insisting that we need them to go, don’t forget about 120 of them have actually gone.  So, it’s not as if the complete set hasn’t gone. 120 of them are there. They actually worked the last crop.”

Bhim further explained that the number of days spent harvesting canes during the last crop at Uitvlugt has more to do with the number of canes in the fields rather than the number of workers who were employed.

“It just depends on the amount of cane that we have in the field. The other point to note is that on a daily basis at Uitvlugt, in the last crop, I think the turn out we had was only about 58 – 60%. So, it wasn’t as if we had sufficient cane harvesters on a daily basis to take the cane off because the factory ended up being out of cane on an average, 20 hours a week probably 30 at times. So, it’s not as if we had sufficient harvesters.”

Since the closure of the Wales Estate several affected workers have been given redundancy payment while a large number of those transferred to Uitvlugt have consistently refused to take up the offer of work. This puts them at the risk of self-termination which is in accordance with the Collective Labour Agreement between the Guyana Agricultural and General Workers Union (GAWU).