The Ptolemy Reid Rehabilitation Centre has been providing employment for the differently abled persons for some 50 years now; this was revealed during a visit today by the Minister of Public Health Volda Lawrence. 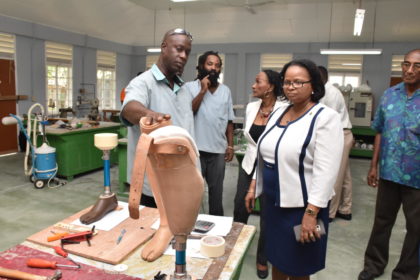 Minister Lawrence in the National Orthotic and Prosthetic appliance workshop, with Collin Charles, explaining the process of making a Prosthetic leg.

This minister’s visit is part of the facility’s activities to celebrate their 50th anniversary. In an exclusive interview with Department of Public Information (DPI)/ Government Information Agency (GINA) Renetta Hopkinson, a person with a disability, who has been employed as a Nurse since 2014 at the Centre urged persons with disabilities to, “not isolate” themselves, while urging persons with disabilities to visit the Centre so “they too can get help.” Nurse Hopkinson highlighted that not only is her job educational and gives her job satisfaction but it has motivated her to feel better about life. She plans to continue in her job to help children similarly affected.

“We do not employ them simply because they have a disability,” Massay pointed out, “They must be able to provide that service,” the Centre provides training for such persons. For example, there is a young woman who resides at the Centre; she is currently employed in the kitchen as the Cook Maid. The young woman has completed the Cookery Programme with the Board of Industrial Training (BIT) and is certified.

Massay explained that one of the typists, with a disability, has many subjects however, she was unable to access the 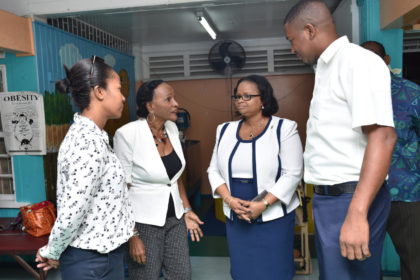 University of Guyana because they do not have the physical infrastructure in place. Minister Lawrence described the situation as “low hanging fruit,” and pledged her commitment to “help broaden the education opportunities for persons with disabilities.”

One of the issues which the Administrator highlighted was that there are only two trained technicians in the National Orthotic and Prosthetic appliance workshop. Collin Charles and Dwayne Atkinson are the only qualified persons that can make authentic, prosthetic legs and/ arms in the country. Massay lamented that if one of them decides to migrate or fall ill, the department will be gravely affected.

A programme was started last April to train technicians locally. The first six months theoretical part has been completed. The Centre is currently waiting to have the trainees appointed to the vacant positions.

Minister Lawrence has committed her Ministry’s to best effort towards reducing the cost for Orthotic and Prosthetic limbs. “We are committed to modernising the workshop,” the minister said. 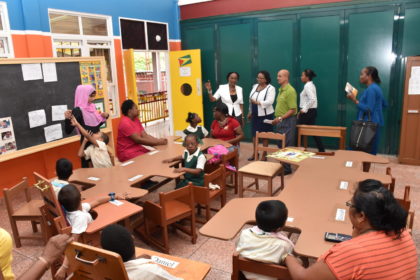 The Inner Wheel Club of Georgetown has aided with the renovations of the boy’s dorm, which is expected to be opened next week. The girl’s dorm will be expanded to include the current boy’s dorm.

Minister Lawrence expressed unconditional gratitude for the work at the Ptolemy Reid Rehabilitation Centre and urged persons to do whatever they can to help the institution.