The Ministry of Public Health today, held a mini health fair to sensitise the public about the consequences of tobacco use in observance of World No Tobacco Day under the theme ‘Tobacco – a threat to development.” 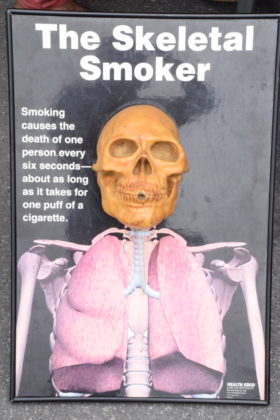 A diagram of a smoker’s skeletal

Some of the persons who attended the health fair said that they were informed about it via a text message and found that the services provided to be quite convenient since they have not be able to do checkups.

Dr. Troy Sagon attached to the Chronic Diseases Unit, Ministry of Public Health told the Government Information Agency (GINA) that he hopes that the mini health fair would serve to highlight the different stages in which tobacco usage affects the body.

“The Ministry of Public Health’s point of view in terms of World No Tobacco Day is to decrease the use and that is why they signed a treaty with WHO Framework Convention for Tobacco Control (FCTC) to basically ban tobacco companies’ advertisement or the promotion of tobacco products. They are also trying to increase the taxation on tobacco and banning the smoking of tobacco product in public places while making places smoke free zone,” Dr. Sagon added.

The doctor pointed out that though the public health ministry had laid the Tobacco Control Bill in the National Assembly last year, and which which was delayed, the ministry will ensure that the bill will be approved this year.

According to the PAHO/WHO (Pan American Health Organisation/World Health Organisation) website, tobacco use kills more than seven million people every year and costs households and governments over US$ 1.4 trillion through healthcare expenditure and even lost productivity.

World No Tobacco Day was approved in 1987 by WHO’s World Health Assembly to encourage tobacco users worldwide to abstain from using tobacco products for 24 hours with the hope that it will also provide assistance to those attempting to quit.