His Excellency, President David Granger, has stated that the Decade of Development will see “accelerated progress in promoting human development, particularly human health.”

The Head of State was at the time attending the commissioning of the newly rehabilitated Georgetown Public Hospital Corporation staff quarters on Wednesday. 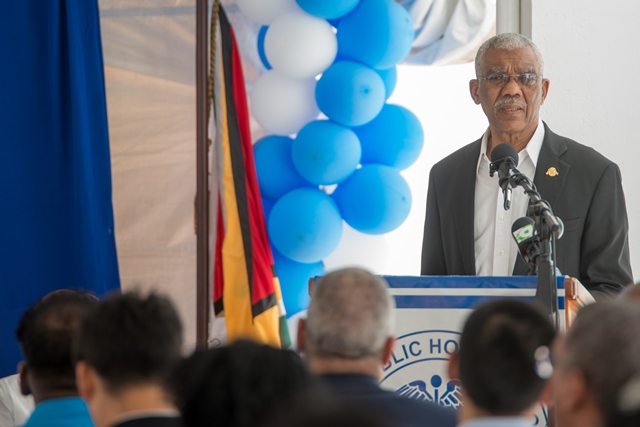 He noted that the prevalence of transnational health challenges, such as the novel coronavirus, Zika, and H1N1 virus, had the potential to overwhelm national public health systems of small states.

“Guyana, recognising the need to respond to local and transnational public health challenges, refocussed its attention to protecting the population from harm,” the president said.

He outlined several priorities which his government will focus on to safeguard the health and wellness of Guyanese, including s a significant increase in investments in the public health system over the next 10 years.

“Public expenditure on health care will achieve or surpass the PAHO-WHO target of six percent of GDP, by the end of the Decade,” the president assured.

A more inclusive public health system will be established, ensuring access and delivery of quality healthcare to women, children, adolescents, the elderly, hinterland communities, and the disabled.

President Granger added that priority would be on primary healthcare to achieve universal health coverage.

“Preventive health care will be emphasised to reducing the incidence of non-communicable diseases, which now account for more than 70 per cent of all deaths.”

The reorganisation of the local public health sector has already started with several new policies being implemented while some have been amended to accommodate modern healthcare delivery. President Granger stressed that it is the right of every citizen to receive accessible, timely, and high-quality healthcare service.