Upper Takutu/Upper Essequibo -March 1, 2017: The administration is expected to begin talks with regional engineers to examine the viability of altering the roofing designs currently being used on school buildings across the country. 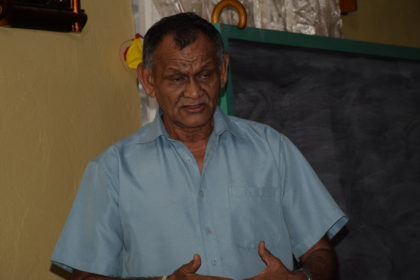 Sears-Joseph revealed that recently seven bags of bat droppings were collected from one school.

This, she said, is extremely unhealthy and can affect the performance and overall wellbeing of the students and teachers.

Of the 83 schools in the region, some with dormitories, request was made for a sizable amount of money towards cleaning and extermination.

However, owing to limited financial resources available to the region, this could not have been facilitated.

Regional Chairman, Bryan Allicock, in confirming Sears-Joseph’s comments, said that the administration must now seriously consider altering the roofing design of schools to prevent the ongoing crisis of bats infestation.

He noted that during several outreaches to a particular school, he noticed the head teacher had an incessant runny nose and the students were all itching and scratching.

Allicock promised to meet with regional engineers to examine alternative designs and also undertook to address some of the extermination issues.

The Regional Chairman said this is one of the reasons why the RDC must be involved meaningfully when major projects are undertaken.

With regards to agriculture, Farm Manager of the National Agricultural Extension Institute (NAREI), Joseph Gonsalves said with the intention of government to install a commercial mill and cassava factory in two communities, there is need for mechanization.

Gonsalves stated that the cassava cannot be harvested with basic garden tools for the purposes of supplying a commercial mill but such activity would require heavy duty equipment.

“If we do this, then we would have two weeks of harvesting and then the facility will become a white elephant and we would have to wait until next crop,” Gonsalves noted.

He reported that he had made a request for a four-row planter and a harvester that would uproot, cut and load the cassava for transport to 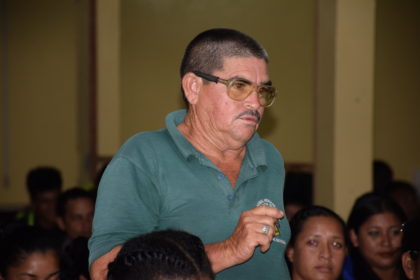 “If the administration has job creation and sustainable development on its agenda, these are the initiatives that must have priority,” the farm manager said.

Sanitation Worker, Camille Robertson disclosed that a lot of the schools in the region were without the requisite text books to conduct research. “Parents cannot afford to buy all these books. During a PTA meeting, parents were told that there was only one book in Grade 10,” Robertson pointed out.

Regional Literacy Coordinator, Mark DeFrance applauded the Math initiative which he dubbed a “very timely and bold intervention” and heaped praises on President David Granger for the 5Bs initiatives.

He noted however, that there are still some outlying communities from which students are forced to walk long distances for about 2-3 hours on rocky terrain and even barefooted.

In addressing the concerns, Minister Bulkan said he has an appreciation for the problems plaguing the region but spoke of the queue of projects competing for central government attention and funding.

“There is no inexhaustible pool from which we get resources but with the limited supply we must find ways to provide for critical priority activities,” Minister Bulkan said.

Endorsing the need for agricultural equipment to drive the cassava mill, Minister Bulkan said he would undertake to engage the Ministry of Agriculture in relation to the concern.

“We have to ensure these ideas are not still born but are stimulated and given life. These added-value activities will create jobs, ensure food security and reduce the reliance on imported food.”

Lamenting the bat infestation issue, Minister Bulkan stressed that the administration is committed to the proper delivery of education. He said it is unfortunate that many schools are faced with design deficiencies.

Making reference to the Kato Secondary School, the minister said that it was sinful to have scarce resources squandered on a defective facility which should have been offering a good standard of education to the community.

“Design is one of the worst construction projects. There is no reliable source of electricity, no natural ventilation, toilets were placed on the windward side of the building. It seems as though someone deliberately went out of their way to construct an oven,” he said.

Minister Bulkan related that because of President Granger’s personal conviction on the importance of education, he started the 5Bs project to provide boats, buses, books, breakfasts and bicycles on behalf of the government.

He mentioned that Minister of Social Cohesion, Amna Ally, who is responsible for the initiative, only recently dispatched 10 bicycles to three hinterland communities.

The Communities Minister said in order to reduce the gap in poverty, fewer unequal economic conditions must exist between communities on the coastland as against those in the hinterland.