Declaring open the annual Guyana Police Force Officers Conference, His Excellency President David Granger reiterated that the body is constitutionally mandated to serve and protect everyone and everywhere within the country.

He noted that an efficient, well-equipped, well-trained and professional Guyana Police Force is required to maintain safety and public order. As such President Granger outlined several reforms key to the efficiency and efficacy of law enforcement, 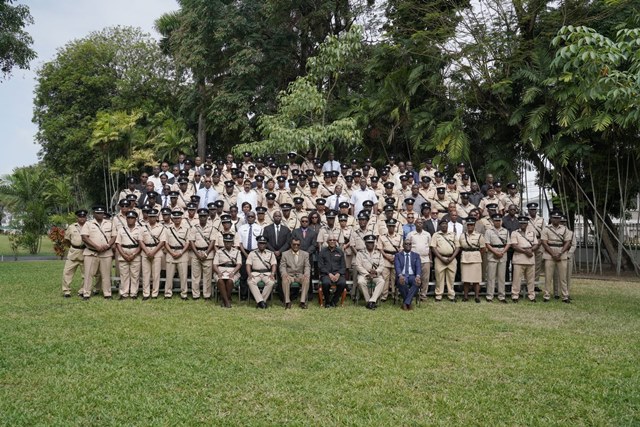 According to the Head of State, greater emphasis will be placed on planning and implementation with a Strategic Planning Unit established to coordinate change activities within the Force, in 2017.

“Security sector reform is a high priority of the government’s public security policy. It involves measures to promote greater probity in the work of the police and to ensure greater integrity among its members. The Force has been implementing institutional restructuring.”

Recalling the appointment of the four Deputy Commissioners, the President noted that the promotions aim to streamline the GPF’s management and ensure it is managed more efficiently, to motivate officers and to rebuild public trust in the Force’s work.

Among the other reforms listed were Infrastructural improvements. These have seen 15 new police stations and outposts constructed over the past five years and 18 rehabilitated. Also established were Divisional-based Management Information Units, preparations for the introduction of a National Intelligence Model, linking of 46 police stations to the Integrated Crime Information System, Forensic and Science Laboratory upgrades and implementation of an Electronic Document Management System (EDMS).

In keeping with the Decade of Development, President Granger announced that police stations, outposts and headquarters will be expected to fully transition to renewable self-sufficient energy sources by the end of 2029.

Plans to recapitalise the force, with support from friendly states, were put forward by the Head of State.

“The Force’s transportation fleet since 2015 has been increased with the addition of 338 new vehicles… Thirty-four boats, engines and other riverine craft were added to the Marine Branch over the past five years to enhance its marine capability. The use of body cameras by ranks, piloted in Division 4 ‘A’, is now being extended to other Divisions. The nine-eleven (911) system was revamped to improve timely responsiveness to reports of crime.”

It was highlighted that more resources were provided to boost the Force’s crime-fighting capabilities. Expenditure [current and capital] increased from $7.5Billion in 2014 to $13.9 Billion in 2019. The Government has provided for $56.5Billion of the Force’s expenditure over the past five years.

Referring to the Decade of Development the Head of State noted that the GPF’s personnel strength of about 4,600 members is being augmented along with salaries and benefits.

In bringing the GPF to strength, President Granger opined that trained police officers must be deployed away from non-core functions such as immigration, certification of vehicular fitness and issuance of gun licenses.

The vigorous efforts to improve relations between the Force and communities was further noted by the President. These include the Citizen Security Strengthening Programme funded the establishment of twenty Community Action Councils and Team Policing, the latter introduced, in 2017.

In terms of oversight, it was observed that the reconstituted Police Service Commission has disabused officers of fears about the personalisation or politicization of appointments.

He further noted the re-appointing of the Police Complaints Authority on 12th September 2018 adding, “The investment made in re-organising, restructuring and re-capitalising the Force has paid dividends. There is renewed confidence Policing. Fewer complaints about extra-judicial actions have been registered. The Force is improving as it enters a new decade of the millennium… The reforms which will be implemented during the Decade of Development will allow a modern and professional Police Force to emerge.”

Notable improvements the President revealed will see re-establishment of The Aviation Unit, expansion of the Tactical Services Unit into two Squads, a Hinterland Squad and the Coastland Squad, an increased Mounted Branch, a strengthened Marine Branch for every division and a Communications Branch linking every police station through a secure communications network.

In closing the Head of State restated that GPF officers “are expected to be forward-looking and not retrospective… must commit to leading the Force into a new era of modernisation and greater professionalization and to accelerate the reforms taking place. Officers, ultimately, are the guarantors of human safety and public security all the time, to everyone, everywhere in Guyana.”