Region Five walk against the dangers of TIP

More than 200 persons walked from Union, Region Five to the Fort Wellington Secondary School to highlight the dangers of Trafficking in Persons (TIP). The walk was organised by the Ministry of Public Security on Sunday.

The walk is among a series of activities planned in commemoration of World Day against Trafficking in Persons which has been observed on July 30 since 2013. The observation is intended to raise awareness of the situation of victims of human trafficking and for the promotion and protection of their rights. 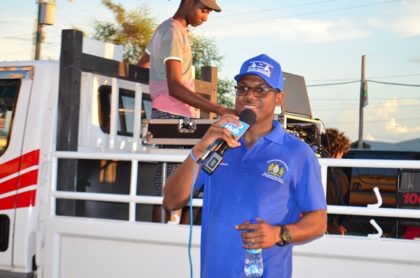 Acting Coordinator of the Trafficking in Persons Taskforce at the Ministry of Public Security Oliver Profitt.

Trafficking in Person is one of the top three lucrative crimes in the world next to robbery under arms and drug trafficking.  Acting Coordinator of the Trafficking in Persons Taskforce at Ministry of Public Security, Oliver Profitt, noted that the phenomenon is no stranger to Guyana. “So we always need to be aware, hence the walk making ourselves more aware…and sharing information with others,” Profitt told the Department of Public Information (DPI).

Over the last three years, there has been an increase in the number of reported TIP cases as a result of increased awareness and education on the issue. In 2014, there were 40 identified victims, 59 in 2015 and 98 in 2016.

Profitt noted that human trafficking can affect everyone which is why there is need for more vigilance and cooperation. “The purpose of trafficking in persons is to exploit the victims whether it is sexual exploitation, labour exploitation or organ harvesting and this is all for money…those persons do not care about you and me or how much it can affect a person; all they know, they will make money off of their actions so we need to fight back,” Profitt said.

He noted that the fight is “each and every one of us” and not only the government.

Last month, the US State Department announced that Guyana met the minimum standards for the elimination of Trafficking in Persons (TIP) and had been moved up to a Tier Level One rating for its efforts to combat human trafficking. This achievement was credited to the government’s heightened fight against the phenomenon including employing several new strategies.

Strategies include the launch of the National Plan of Action for the Prevention and Response to Trafficking in Persons 2017-2018. At that launch, President David Granger had reaffirmed the government’s commitment to reversing the indifference shown by the previous administration towards the incidences of (TIP) by enhancing education and strengthening enforcement in order to eliminate the scourge entirely. 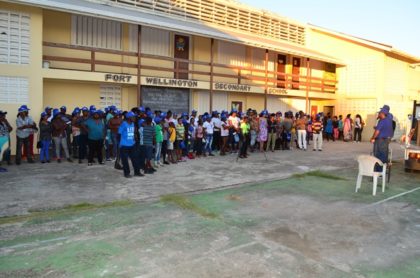 A section of the Trafficking in Persons (TIP) advocates at the finish line recapping their views. 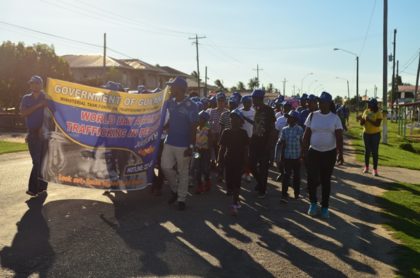 The Trafficking In Persons (TIP) awareness walk in Region Five.