Regional Chairpersons are accountable to the people – Minister Bulkan

Minister of Communities, Ronald Bulkan has criticised Regional Chairpersons, who continue to boycott meetings, events and even visits by the Head of State to their respective regions.

His comment was made on Wednesday at the National Day of Villages held at Den Amstel, Essequibo Islands-West Demerara (Region 3), where he expressed disappointment at the non-attendance of Regional Chairman, Julius Faerber at the event. 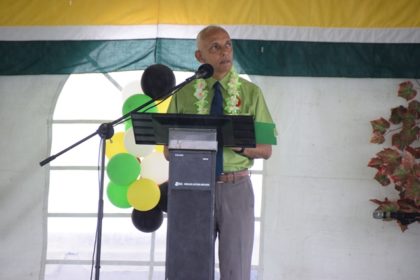 The Minister highlighted that just a week prior, during a visit to Mabaruma, Barima- Waini (Region One), by President David Granger, the Regional Chairman, Brentnol Ashley was absent.

“Our Regional Chairpersons are going in the wrong direction, they seem to be developing a pattern of follow-the-leader, but I would like to urge and caution them that their responsibilities are to the residents of their region,” the Minister said.

He further noted that if these Chairpersons choose not to engage and participate in official events, they are doing a disservice to the residents of the regions. Despite this, Minister Bulkan has assured residents that Central Government, together with the Regional Administration will ensure that development continues there.

The Regional Executive Officer (REO), Denis Jaikaran during his remarks at the celebration gave his commitment to working fully with Government to address matters of importance to the region.

The Communities Minister is adamant that change is coming, since all nine mayors, including the People’s Progressive Party (PPP) Mayors of Corriverton, Rose Hall, and Anna Regina attended a recent seminar hosted by the ministry. He believes that the local leaders are beginning to recognise that they are accountable to the residents in their towns and not to persons who do not have their best interests at heart.

“Change is happening, though I dare say, there’s no one size that fits all. Given all that we are seeing and with regard to non-cooperation many may question, why is this Administration so committed to decentralisation, why not keep all the power to itself as many have done, after all, it came with many other advantages,” Minister Bulkan noted.

In this regard, the Minister said it is in recognition of the divided nature of the country Government believes that if all the power is concentrated centrally, then the problem would be exacerbated. Respecting the authority of the local organs, he said is rejecting “winner takes all” politics.

He said it is a key part of Government’s plan of building a brighter future for all.