GEORGETOWN, MOPH – THE “structured, coherent and collaborative” nature of Guyana’s Regional disaster preparedness plan was on display in Bartica (Cuyuni/Mazaruni) this week during a cooperative venture sponsored by the Public Health Ministry, PAHO/WHO and the Civil Defence Commission (CDC).

The four-day simulation exercise was designed to test the Regional Multi- Hazard Preparedness and Response Plan (RMPRPP) which outlines their capacity to manage any disaster in the gold-mining municipality. 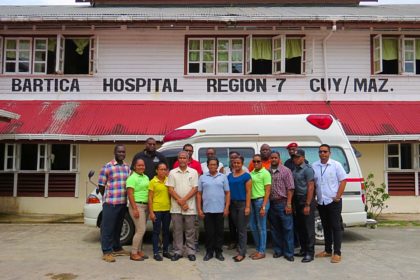 Participants and Facilitators at the RMHPRP with Dr Edward Sagala, Regional Health Officer, Region 7 at the Bartica Regional Hospital.

Region 7 Chairman Mr Gordon Bradford who lauded the initiative reminded the 25 participants during his address that “once you understand something, you are better able to respond. Your early and timely response may very well save lives or more destruction.”

Stressing the pivotal role of preparedness, Bradford pointed trainees to the outcomes of catastrophic events: “For instance, when we look at flooding, everybody thinks about rainfall and water on the land and everyone feel that’s the end of it. But, if we are not prepared and we don’t take the correct action, the aftermath of the flood might be more devastation than the flood itself.”

“I would say that the training was much needed. Things were done in the past but we hadn’t a functional structure in place. Now all the agencies will be able to better respond if a crisis or disaster hits the region,” Bradford’s deputy, Olinda Kyrenhoff- Griffith noted.

Kyrenhoff-Griffith also praised the initiative as “an opening to make stakeholders understand their functions in a health situation. Health involves everyone and not just the hospital administration”.

The plan details all hazard/ comprehensive approach to the DRM, Welcome explained.

As facilitator of the exercise, Welcome said that Barticians will benefit in many ways from the implementation of the plan.

“Generally, it provides them a structured and coherent and collaborative framework that facilities better/enhanced DRM in facilitating timely response, detailed and accurate damage assessment,” Welcome said.

“I believe I was able to achieve the objectives of the four days. The manifestation of this achievement is the quality of input from the participants during the (simulation) exercise; the demonstration of learning and the transfer of knowledge”, he said.

Environmental Health Officer (EHO) Alicia Newton, her department plays a vital role in sensitising the community on maintenance measures to facilitate proper sanitation at all times, especially in cases of a health emergency or disaster.

Kelwya Yaw, Officer in charge at the Bartica Fire Station said “it is important that each agency understand their roles and functions especially since some of us are first responders at a situation”, Yaw said.

Regional Health Officer (RHO) Dr Edward Sagala said the simulation exercise has better prepared the Hospital’s administration and other stakeholders to handle an emergencies and disasters. 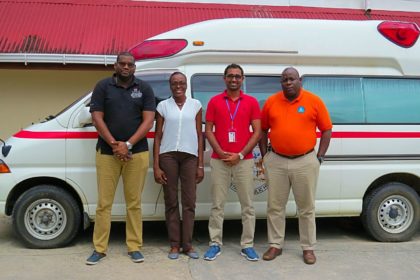 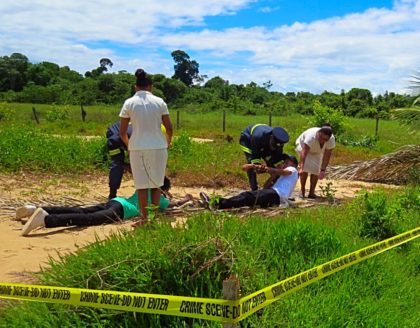 Health Workers and Fire Fighters responses to a ‘staged’ health emergency in Bartica.