Regions to benefit from increase allocation in 2018- Minister Bulkan.

The capital allocations for the administrative regions will see an increase of some eight percent in 2018. This was disclosed by Minister of Communities, Ronald Bulkan during the debates of the 2018 budget, this evening.

Addressing regional development, Minister Bulkan explained that the highest allocation of $544M will go to the Region Six, East Berbice, Corentyne while the smallest provision of approximately $226M will go to Region Eight, Potaro-Siparuni. He added that all the hinterland regions will enjoy increases of ten percent or more in allocation. 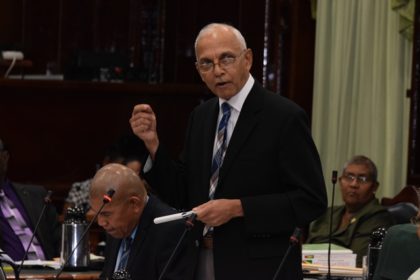 Meanwhile he explained that “Proposed recurrent allocations stand at $33.8B, an increase of more than $2B.”

Minister Bulkan underscored that in 2017 the Regional Democratic Councils (RDCs) had received government funding of approximately $35.5B; recurrent appropriations-$31.6B and capital investments-$3.9B.

The Minister admitted that the Public-Sector Investment Programme (PSIP) for the regions suffered from sloth in its implementation. Despite this, the overall execution of the regions’ 2017 capital programmes, to date stands at 74 percent of the year’s Budget, Minister Bulkan  boasted.

“To give but the briefest of account as to what these Capital Investments fund, is as follows: in 2017 the Ministry produced a very important training manual or Handbook for councillors, it has been distributed to each of the approximately 1170 councillors as well as administrative staff in the 71 Local Democratic Organs….,” Minister Bulkan explained.

Other regional developments achieved in 2017 and highlighted by the Minister include the promotion of Regional Agricultural and Commercial Exhibitions (RACE) and the National and Regional Development Consultative Committee (NRDCC).

RACE, Minister Bulkan indicated is to spur and support local economic development. Minister Bulkan pointed out that RACE will be held annually in every region and the exhibitions will showcase and promote local products in their respective regions.

The NRDCC, he reminded, the Opposition boycotted and declared that “this time we do not expect a repeat of the boycott and we look forward to engaging the regional leadership in issues critical to the development of their respective regions.