Lot one of the Caribbean Development Bank (CDB) funded $6.4 Billion (US$30.9M) Sea and River Defence Resilience project is on schedule and is expected to be completed by June 2019, according to   contractor Dr. Khrisna Narine of SRK Engineering firm

In an interview with the Department of Public Information, (DPI), Narine said this phase of the project caters for works along the Essequibo Coast at Johanna Cecelia, Zorg and Golden Fleece, and at Success and Endeavour on the island of Leguan.

Minister of Public Infrastructure David Patterson being provided with an update with the ongoing works by the technical officers. 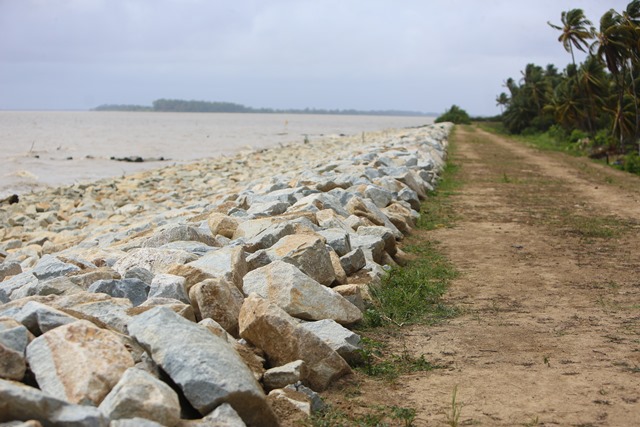 A section of the Sea and River Defence Resilience project on the Essequibo Coast.

He noted that within another seven weeks, the works at Zorg’s sea defence will be completed after which, works will commence on the Essequibo Coast at Golden Fleece.

Narine noted that while one of the components of the project is to rehabilitate the sea defence mechanism, it is also a land reclamation exercise.

“As you can see the line of the old defence was out in the sea, and after years of breaches, they retreated in and in until the sea dam was close to the house lots…so what we have taken to opportunity to do in this project was to go back to the original line of sea defence,” he explained. Narine further added that with the reclaimed land, recreational facilities can be constructed.

According to Narine, Phase one is also well within its budget.

The CDB funded project was launched in 2016 and expanded in 2018. It is expected to provide for the reconstruction and improvement of approximately 5.4 km of sea and river defences in eight critical areas, in Regions Two, Three, Four and Six.